Trump Warn Americans To Prepare For A Depression: More Devastating Than Most People Expect – “What’s Coming Is WORSE Than A Recession”

Trump Warn Americans To Prepare For A Depression: More Devastating Than Most People Expect – “What’s Coming Is WORSE Than A Recession” 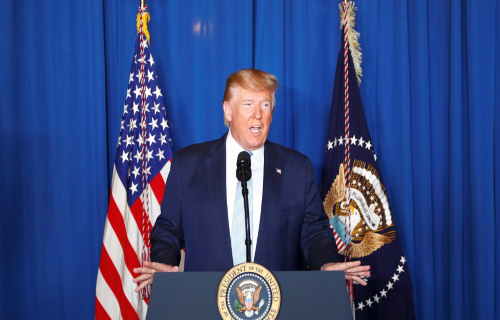 Former President Trump came forward during a rally last week to warn that America’s economy is going down the drain and is set to face a much bigger disaster than a typical downturn over the next couple of months. His forecasts came shortly before new official numbers showed that U.S. economic growth is declining for the second consecutive quarter while consumer prices reached the highest level in a generation, and Americans’ purchasing power continues to shrink. At this point, there’s no way to avoid another economic slump, and what is coming next is going to be even more devastating than most people expect, experts say.

“Where we’re going now could be a very bad place.” He emphasized that millions of Americans are seeing their real wages collapse as inflation continues to rise and eat a bigger share of workers’ buying power. At the same time, worsening labor conditions have resulted in a historically depressed labor force participation rate, and the administration’s current push for a Green New Deal is only going to accelerate our economic slump given that the nation’s critical energy supplies are dwindling. “We got to get this act in order, we have to get this country going, or we’re going to have a serious problem,” he alerted.

In his view, calling the next downturn a recession is not enough to describe the difficulties we’re all going to face. Considering that virtually every sector of the economy is being hit by one disruption after the other, Trump argues that an economic depression that will rival the Great Depression of the 1930s is ahead, and a few days after his speech, new official numbers were released and they indicate that his forecasts might be spot on.
“On Friday, the Bureau of Economic Analysis released data showing that real U.S. GDP fell by an annualized 0.9 percent in the second quarter after contracting 1.6 percent in the first quarter. Two consecutive quarters of negative GDP growth are a common definition for a recession, although recessions in the United States are officially declared by a committee of economists at the National Bureau of Economic Research using a broader definition than the two-quarter rule,” as explained by Tom Ozimek in a new article for The Epoch Times.
No wonder why so many experts believe things will get far worse as we move towards the end of the year. In his remarks, the former president also criticized the current government’s handling of the economy, blaming the Democrat-controlled White House for soaring inflation and growing economic imbalances.

On top of all of that, skyrocketing energy prices are making the situation much more complicated. According to the Bureau of Labor Statistics, soaring energy costs accounted for around half of the headline inflation figure. Trump argued that these decisions left the United States in a very vulnerable position. Now, we’re literally “begging” other countries to pump more oil instead of trying to ramp up domestic production. The shortage of energy supplies is already slowing down manufacturing activity and contributing to the deterioration of the country’s economic conditions. The term “recession” can be described as a broad-based weakness in the economy, and that’s exactly what we’re witnessing right now.

It’s safe to say that their attempts to curb inflation by rising interest rates will only make things worse.

The world is headed towards a global recession and prolonged stagnation unless fiscal and monetary policies holding sway in some advanced economies are quickly changed, according to a new report released on Monday by the UN Conference on Trade and Development (UNCTAD).
“This is a matter of policy choices and political will,” she added, noting that the current course of action is hurting the most vulnerable.
UNCTAD is warning that the policy-induced global recession could be worse than the global financial crisis of 2007 to 2009.

The Development prospects in a fractured world report points out that supply-side shocks, waning consumer and investor confidence, and the war in Ukraine have provoked a global slowdown and triggered inflationary pressures.

And while all regions will be affected, alarm bells are ringing most for developing countries, many of which are edging closer to debt default.

As climate stress intensifies, so do losses and damage inside vulnerable economies that lack the fiscal space to deal with disasters.

Grim outlook
The report projects that world economic growth will slow to 2.5 per cent in 2022 and drop to 2.2 per cent in 2023 – a global slowdown that would leave GDP below its pre-COVID pandemic trend and cost the world more than $17 trillion in lost productivity.

Despite this, leading central banks are sharply raising interest rates, threatening to cut off growth and making life much harder for the heavily indebted.

The global slowdown will further expose developing countries to a cascade of debt, health, and climate crises.

Debt crisis
With 60 per cent of low-income countries and 30 per cent of emerging market economies in or near debt distress, UNCTAD warns of a possible global debt crisis.

Countries that were showing signs of debt distress before the pandemic are being hit especially hard by the global slowdown.

And climate shocks are heightening the risk of economic instability in indebted developing countries, seemingly under-appreciated by the G20 major economies and other international financial bodies.

“Developing countries have already spent an estimated $379 billion of reserves to defend their currencies this year,” almost double the amount of the International Monetary Fund’s (IMF) recently allocated Special Drawing Rights to supplement their official reserves.

The UN body is requesting that international financial institutions urgently provide increased liquidity and extend debt relief for developing countries. It’s calling on the IMF to allow fairer use of Special Drawing Rights; and for countries to prioritize a multilateral legal framework on debt restructuring.

Some 90 developing countries have seen their currencies weaken against the dollar this year – over a third of them by more than 10 per cent.

And as the prices of necessities like food and energy have soared in the wake of the Ukraine war, a stronger dollar worsens the situation by raising import prices in developing countries.

Moving forward, UNCTAD is calling for advanced economies to avoid austerity measures and international organizations to reform the multilateral architecture to give developing countries a fairer say.

And while upward pressure on fertilizer prices threatens lasting damage to many small farmers around the world, commodity markets have been in a turbulent state for a decade.

Although the UN-brokered Black Sea Grain Initiative has significantly helped to lower global food prices, insufficient attention has been paid to the role of speculators and betting frenzies in futures contracts, commodity swaps and exchange traded funds (ETFs) the report said.

Also, large multinational corporations with considerable market power appear to have taken undue advantage of the current context to boost profits on the backs of some of the world’s poorest.

UNCTAD has asked governments to increase public spending and use price controls on energy, food and other vital areas; investors to channel more money into renewables; and called on the international community to extend more support to the UN-brokered Grain Initiative.
Our money is gradually becoming worthless paper and the decaying living standards of our country will destroy our Republic and plunge us into an economic depression like anything we’ve ever experienced in our lifetime. The moment of truth has arrived. Now more than ever, it’s time towake up.

Share
Facebook
Twitter
Pinterest
WhatsApp
Previous articleGlobal Economy in Freefall: China Manufacturing Orders Drop 40%. World Economy Heads for One of its Worst years in Three Decades
Next articleThe Commonwealth of Australia Constitution is Valid in Australia. It Cannot be Changed Without a Referendum