Timofey Bordachev: The UN Is No Longer Fit for Purpose, but Should It Be Abolished or Reformed?

Timofey Bordachev: The UN Is No Longer Fit for Purpose, but Should It Be Abolished or Reformed?

The global body was created by the winners of humanity’s most destructive war, but that was 80 years ago.

The United Nations is a product of Western intellectual common sense, which after the Second World War created relatively fair conditions in order to maintain its centrality in international politics.

The fact that Western countries are now losing this position is for natural reasons. This inevitably affects their ability to project influence in world affairs, which was based not on formal status, but on unique capabilities of power.

The contraction of these advantages, the consequences of which we are now clearly witnessing, cannot bypass institutions created in a previous era.

This means that the fate of the UN will in any case come into question. The only issue is who decides to raise the subject and for what purpose – the West (in order to preserve its position in the emerging world) or the other great powers (in order to create institutions more in line with the reality of international politics)? A third option is also possible – a new cycle, in which there is little scope for a monopoly position of a narrow group of countries, will have no need for the traditional institutions of international governance at all.

We should not be confused by the fact that powers now as hostile as Russia or China to the Western community are members of the ruling circle of the UN system – as permanent members of the Security Council (UNSC).

“The UN’s ability to really run the world has always remained largely an illusion.”

The real reason for these two states to retain this status was the rational desire of the US and its closest allies to avoid a repeat of the situation in which powers perceived to be dangerous to global stability were excluded from formal institutions. The lesson of the destruction that emerged from Versailles after World War I by an aggrieved Germany and Japan was well learned – in both theory and practice.

All the more so because the presence of the USSR and (after the Communist Party had succeeded in asserting its authority) China at the Security Council table did not increase their competitive advantage. Where they were tactically stronger than the US, it was not because of their formal status (not to mention that when official Beijing was allowed into the body, its relations with Moscow were openly hostile, with the two then-socialist powers blocking each other.)

There is no doubt that on occasion, the permanent members of the UNSC have been able to act as an all-powerful ‘world government’, defining for the weaker members of the international community the boundaries of what is allowed.

But this institution has never dealt with questions of war and peace between its members. This mission has always remained the privilege of bilateral relations, determined by the ‘real’ rather than ‘formal’ balance of power.

This is still the case today – the only ‘institution’ in Russia-US relations is their capacity for mutual assured destruction. The Security Council can only reflect the real balance of power in the world, which is much broader and more diverse than the Moscow-Washington confrontation.

However, it is precisely this possibility that it is now lacking as a result of its composition, which pursues, not ‘global governance’, but ‘global containment’ of both Russia and China by maintaining the hegemonic position of the West.

This statement may seem paradoxical, since Russia and China have the same rights in the Security Council as the other three permanent members. This is true, but beyond the purely legal status that confers veto power on the quintet, there is the practical ability to influence world governance through the control of procedural practices (personnel assignments in the international bureaucracy, for example).

Here too, the US and its allies had an enormous advantage at the creation of the UN in 1945, and retain it to a large extent due to the inertia of the institution itself. As a result, the inclusion of Moscow and Beijing in the most important mechanism restrains their hypothetical revolutionary behavior, but does not provide them with the same degree of influence on world governance as the West.

In other words, the UNSC is becoming a very sophisticated form of deterrence which is carried out by granting two adversary countries a special status. This status narrows their scope for independent behavior and separates them from the rest of the international community. For the latter, the status is a privilege that the self-appointed ‘world elite’ has arrogated to itself and which it refuses to share. Thus, in its modern form, the UNSC is a way to maintain the monopoly of the US and Western Europe in international politics.

The world is indeed changing, and not only as a result of the dynamics of power relations between the Great Powers. While Russia’s military assertiveness and China’s economic weight remain the main battering rams against the international system led by the West, their actions are not determinants of the irreversibility of change. Otherwise, the revisionism of Moscow and Beijing would repeat the fate of revolutionary France in the early 19th century, or of Germany and Japan, which rebelled in the second quarter of the previous century against the injustice of the world order of that time. But we already see that this is not a likely prospect, precisely because the majority of developing countries are in fact on the side of the Russian-Chinese front.

Even if some of them formally condemned Russia’s actions in Ukraine during the UN General Assembly vote, their policies show that they are aware of their changing position in the international system. This conclusion is also supported by the fact that India, Brazil, Indonesia, and Vietnam have generally opted for a position of benevolent neutrality.

That said, we do not know whether the Russian leadership itself was convinced that it would be impossible to isolate Moscow. However, Russia’s military assertiveness on the Ukraine issue has helped everyone see that the status quo favored by the West is already a thing of the past.

The fundamental transformation of the global balance of power has three main sources. Firstly, economic globalization, which emerged under the shadow of Western domination, has provided many medium and large countries with new resources to meet their development challenges. Secondly, the objective reduction of the material capabilities of the West, which is no longer able to offer the rest of the world attractive sources of prosperity that are worth giving up their own interests for. Thirdly, there is a rising self-confidence of a host of relatively new actors in international politics derived from the first two factors.

As a result of this emancipation, the West is no longer able to enforce the mechanisms of world politics that would enable it to continue to extract maximum resources on beneficial grounds. This state of affairs has been clearly demonstrated in recent years, when most of the initiatives that benefit the US and Western Europe, for example, in the area of climate change, were not secured by clear benefits for others, but by the use of instruments of direct coercion. The failure of the attempts to isolate Russia, even though the West relied on formal international law in condemning its actions, clearly demonstrated the refusal of other countries to follow the Western course. Most of the world does so not out of sympathy for Russia, but for their own selfish reasons.

This new world is not and cannot be embodied in the UNSC, the main institution of international security. This is simply because it was created for another world, from which all its procedures and practices are adapted, from the location of its headquarters in New York, to the specifics of appointments to high and middle bureaucratic positions. Therefore, any effort to preserve this institution would a priori prove futile and would only prolong the agony of the old international order, with all its attendant risks.

It would therefore be worthwhile to take the issue of the future of the UN and especially the composition of its main body – the Security Council – much more seriously now. The issue of UNSC reform has been raised by some of the world’s major countries on the grounds that at the end of the first quarter of the 21st century, it is strange to proceed from the legitimacy that emerged from World War II, during which most modern states simply did not exist. There may now be more than historical reasons to revisit the topic, including very real reasons regarding the changing balance of power. And it is not only the West that will have to come to terms with this, but also Russia and China, whose unique position in the UN system is also a product of the domination of the old imperialist powers of Western Europe and North America.

Perhaps we are not yet ready for such a decisive step as abolishing the UN and creating (if necessary) a new principal international institution. But it is certainly time to expand the permanent membership of the Security Council to include India, Brazil, Indonesia, and one or two major African countries known for having an independent stance. This would not solve the problem of the UN’s irrelevance in these changing historical circumstances, but it would buy time for a more thoughtful and fruitful discussion. It is reasonable that the initiative should belong to Russia and China, as they are the most interested parties. 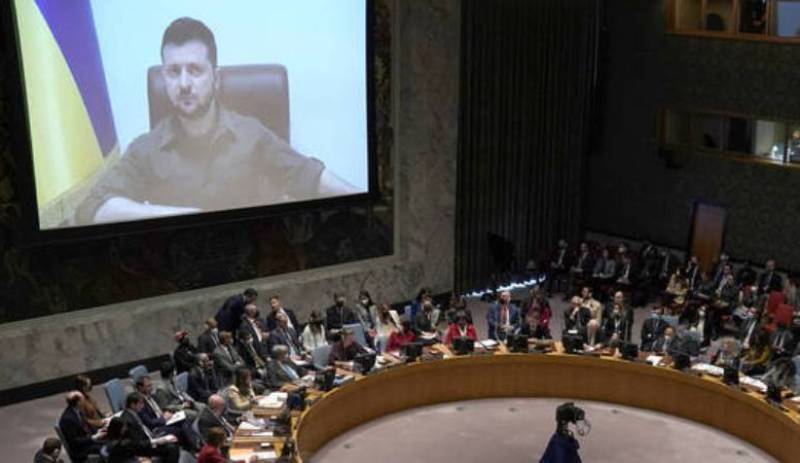