The Seeds of the Split: How the Russian-Speaking Donbass First Attempted to Win Independence from Ukraine in 2004

The Seeds of the Split: How the Russian-Speaking Donbass First Attempted to Win Independence from Ukraine in 2004

The foundations for the current Ukraine conflict were laid almost two decades ago.

In late June, after fierce fighting, the last remaining units of the Ukrainian Armed Forces pulled out of Severodonetsk, a large industrial center in the western part of the Lugansk People’s Republic.

Back in 2004, the city hosted the famous congress of the ‘federalists’, Ukrainian politicians – elected at different levels – who backed the presidential candidate Viktor Yanukovych during the Western-backed Orange Revolution. Back then, they declared then that the Kiev protests were an attempted coup and warned that an illegitimate government coming to power could prompt the congress to establish south-eastern autonomy to protect local residents.

At the same time, regional deputies decided to hold a referendum on changing the country into a federal state and appealed to Russian President Vladimir Putin for support. In this article, RT recounts the first attempt of Ukraine’s southeastern regions to gain independence from Kiev and explains why the events of 2004 defined the future armed conflict in Donbass.

Just a step away from federation

Political discussions about a possible disintegration and reconfiguration of Ukraine have been going on ever since the country became independent in 1991. Ironically, one of the first people to doubt the country’s unity was Vyacheslav Chornovol, the founder of the national democratic party Narodny Rukh (People’s Movement) and a hero for Ukrainian nationalists. Admittedly, he only mentioned the possibility of turning Ukraine into a federation. The idea of federalization was the focal point of discussions that – until the Maidan political crisis of 2014 – were commonly referred to as “separatist” discourse.

As early as 1989, Chornovol said that Ukraine should be a “union of lands.” “I imagine future Ukraine as a federal state, a union of lands, which have come together throughout the course of history and whose natural, climatic, cultural, ethnographic, and linguistic differences, as well as idiosyncrasies in their economies, habits, and customs define the unique diversity of a single people. I envision the People’s Republic of Ukraine, which includes such lands as the Kiev Region, Podolye, Volhynia, Galichina, Bukovina, Transcarpathia, Getmanshchina, Sloboda Ukraine, Zaporozhye, the Donetsk region, and Tauria, whereas Crimea could be an independent neighbor or an autonomous republic in alliance with Ukraine,” he wrote.

Chornovol added that Ukrainian should be the only state language in the new federation, although local authorities could make certain provinces bilingual.

Two years later, in 1991, Chornovol initiated the convention of the so-called Galicia Assembly, which spoke in favor of administrative reform and the creation of a new autonomous regional entity, Galichina, based on the amalgamation of the Lviv, Ternopol, and Ivano-Frankovsk Regions. Even though the assembly was one of the catalysts of Ukraine’s independence, Chornovol’s supporters were accused of separatism after Leonid Kravchuk was elected president. This was in large part due to ideas to create a Donetsk Republic and Novorossiya in the Russian-speaking southeast of Ukraine, which began circulating in the 1990s. Over time, Chornovol’s proposals came to be viewed as too radical, and opponents of federalization have been linking his designs with the breakup of the country for more than 30 years now.

When the Ukrainian constitution was adopted in 1996, it defined Ukraine as a unitary state, which removed the issue of federalization from the agenda. And yet, apart from the 24 regions and two federal-level cities (Kiev and Sevastopol), Ukraine also included the Autonomous Republic of Crimea, which, for a few years, even had its own constitution and president. Throughout those years, Ukrainian presidents Leonid Kravchuk and Leonid Kuchma managed to strike the right balance in their foreign and domestic policies, especially as regards to handling relations between regions on both sides of the “Subtelny line,” which is traditionally used to divide Ukraine into two distinct parts. 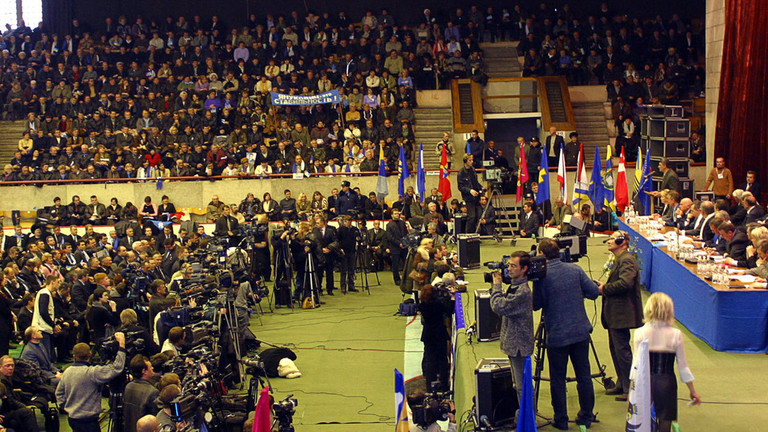 However, in 2004, when the outcome of the protests was still uncertain, politicians who supported Yanukovych (dubbed “pro-Russian” in the West, despite his years of negotiations with the EU) revived the idea of federalization. Members of the Party of Regions claimed that Ukraine had failed as a unitary state and therefore had to be reorganized as a federation with a high degree of autonomy at the level of administrative and territorial entities. Ukraine was going through a real crisis, and, probably for the first time, that schism was pushing the country to the brink of an all-out civilian conflict.

The mass protests in Kiev, which would later be known as the Orange Revolution, were met with little enthusiasm in the southeast of Ukraine, especially in Donbass. While protesters at the Maidan claimed their ‘pro-European’ candidate, Viktor Yushchenko, had his victory “stolen from him,” many supporters of Yanukovych felt the same watching their opponents clamor for official election results, which had declared the latter victorious, to be repealed. A response to the protests in the capital was imminent.

On November 28, the All-Ukrainian Congress of Deputies of All Levels welcomed more than 3,500 pro-Yanukovych delegates from across the country. They declared that the protests were an attempted coup and warned that an illegitimate Yushchenko-led government taking over Kiev could prompt the congress to establishautonomy to protect the residents of southeastern Ukraine.

The final statement of the congress, which had been unanimously adopted by its delegates, said: “If the sociopolitical situation in the country develops according to the worst crisis scenario, we will stand firm and united to defend the vote of the people of Ukraine going as far as holding a referendum on possible changes to the administrative and territorial structure of Ukraine.” The significance of the gathering was further elevated by the presence of Moscow mayor Yuri Luzhkov, who delivered a sharp rebuke to Ukraine’s radical opposition. “On the one hand, we’re seeing this orange-fueled mayhem [orange became the symbol of support for Yushchenko – RT], which claims to represent the majority in Ukraine. On the other hand, we have this quiet force gathered in this room today,” Luzhkov said to a round of applause.

Leaders of Ukraine’s southeastern regions began to voice their support for the idea of reorganizing the country. Kharkov’s authorities decided to set up committees that would have executive state powers. Governor Yevgeny Kushnarev was elected head of the regional executive committee – he was well known as a pro-Russian politician and supporter of federalization, as well as a presidential hopeful according to many journalists and activists. His responsibilities at the time included coordination between other councils in the southeastern territories. The Kharkov Region also stopped making payments to the national budget, waiting for the situation in Kiev to stabilize.

It was Kushnarev who put into words the idea that later defined the development of the Donbass armed conflict. Speaking at the Severodonetsk conference, he said, “I’d like to remind you that we are 400 kilometers away from Kiev and 40 kilometers away from Russia. We understand that the east is very different from Galicia in the west. We are not imposing our way of life on Galicia, but we will never let Galicia lecture us either.” Together with Boris Kolesnikov, head of the Regional Council of Donetsk, he proposed organizing a referendum in every city to see if people trusted the government and asked what they thought of ‘relaunching’ Ukraine as a federal republic.

All of this political activity in the country’s southeast caused some serious concerns in the West, where governments started to see that the dissolution of the state was quite possible. The diplomatic channels were activated. EU and Russian representatives began making frequent visits in order to work out some compromises. At the end of the day, they didn’t include a referendum, but a process was agreed on to transfer power to Yushchenko. The compromise worked like this: Yushchenko got the green light at the election, and his win in the runoff was accepted by the opponents. In return, he agreed to change the constitution and have presidential privileges reduced as of January 1, 2005, thus turning Ukraine into a parliamentary republic. The local governments in the South-East wrapped up their plans.

One Step Closer to the Abyss

As time went on, everyone felt comfortable forgetting about the convention of ‘federalists’ in Severodonetsk and the programs announced by the local governments in the South-East. They were only recalled when attempts were made to blackmail or jail the local big wigs. One shouldn’t underestimate the significance of those events, however. It was the very first time the South-East made it clear what its response was to “patriots” in Kiev trying to seize power and disregard the opinion of half the country’s population while they were at it. Back then, there were no consequences because the parties to the conflict worked out a solution based on compromise, while Russia abstained from backing and pushing Yanukovych.

A little later, however, the members of the Severodonetsk rally came under severe pressure. A criminal charge was launched against Evgeny Kushnarev – a famous member of the Party of Regions – on the grounds of separatism, to be dropped later. That was enough for Kushnarev to distance himself from the separatism agenda, focusing instead on regional issues. In 2005, he “engaged,” as he called it, Yanukovych by merging his New Democracy platform into the Party of Regions. The two politicians ran together in the parliamentary elections in 2006. It was Kushnarev who addressed the items on the election program the most, including the issue of the status of the Russian language.

In January 2007, Kushnarev was severely wounded during a wolf hunt in the Izyum district of Kharkov Region. He was shot by one of his friends, who had joined him for the hunt. A day later, Kushnarev died in spite of two surgeries. He was regarded as the leading anti-Maidan spokesman and a pro-Russian candidate for presidency.

The events of those years – Maidan, federalization attempts in southeastern Ukraine and the death of a popular champion of Russia and federalism, Evgeny Kushnarev – marked the end of the first era in the history of an independent Ukraine. The people in power, Kuchma included, were anything but impeccable. They had a lot to answer for. But they were forged in the Soviet era and they had a sense of responsibility for their country and understood how complex the situation really was in Ukraine and abroad.

During that period, politicians avoided any radical steps and tried to resolve conflicts through compromise. But when Yushchenko came to power, he abandoned this approach and attempted to impose on Ukraine an agenda that was alien to millions of its citizens. Aggressive ‘Ukrainianization’ and a policy aimed at distancing the country from Russia eventually resulted in mounting tensions and a protracted political crisis.

All of that has brought Ukraine to its present state – a country plagued by domestic political crises and economic instability, a nation suffering territorial loss and ravaged by an armed conflict in the southeast that began in 2014. Today, Ukrainians look back on the period, which ended in 2004, as the last peaceful era in Ukraine’s modern history. Kiev’s failure to draw the right conclusions from the ‘Severodonetsk case’ contributed to the tragedy Ukraine experienced in 2014. Ukrainian society was never able to bridge its internal divide, and the revolution that came a decade later only split the country further, leading to the loss of Crimea and a bloody war in Donbass. 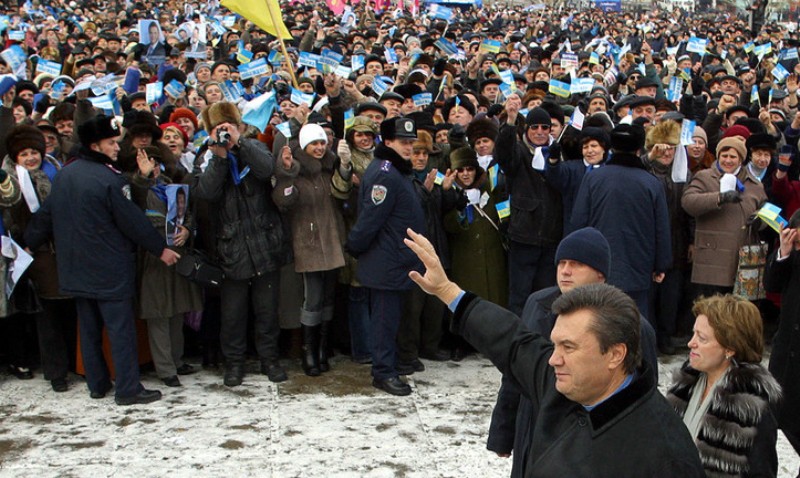