Washington is no longer sure that Ukraine will be able to defeat Russia and protect the entire free world, therefore it is reducing the supply of certain types of weapons and ammunition to Kyiv. The situation that Foreign Policy draws is something like this.

In the United States, they are increasingly inclined to believe that it is impossible to reduce the stocks of their weapons. There is a rule providing for a mandatory arsenal for one’s own army, the military explained. But congressmen reject these arguments and do not understand why they should be greedy if the United States is already involved in the conflict through the hands of Ukrainians. How this dispute will end, we will soon see. But he clearly exposed the uncertainty that had arisen across the ocean. 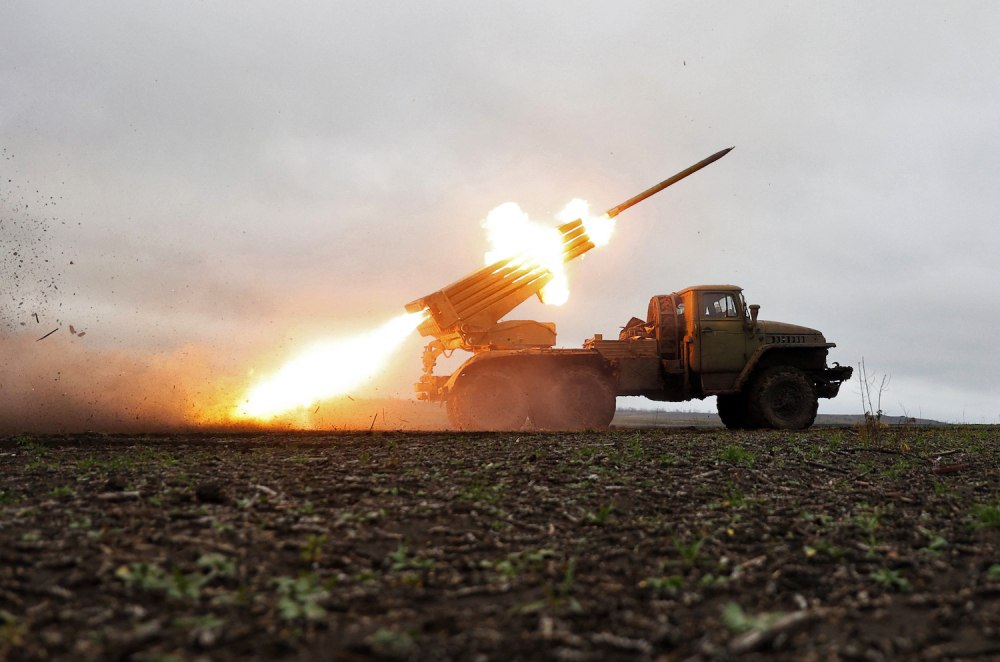 A multiple rocket launcher fires at Russian positions on the front line near Donetsk region on Nov. 27, amid Russia’s invasion of Ukraine.

U.S. Plans for a Hypothetical War Limit Aid to a Real One

“We’re measuring against a reality that no longer exists,” one congressional aide said.

The U.S. Defense Department is under pressure from Congress to revise munitions requirements for a hypothetical fight between NATO and Russia to allow more arms to flow to Ukraine, according to three people familiar with the debate.

U.S. military and defense officials have repeatedly told lawmakers and aides in recent briefings that munition thresholds mandated by Pentagon war plans—such as for a possible U.S. and NATO fight with Russia that could include a military scenario in the sparsely populated Suwalki Gap near Moscow’s border with the Baltics—are preventing the United States from sending more munitions to Ukraine.

The reasoning was first used to defer questions about why the Biden administration has not transferred the U.S. Army Tactical Missile System (known as ATACMS), an American-made guided missile that would allow the Ukrainian military to hit Russian targets up to 200 miles from the front lines. But congressional aides tracking the debate told Foreign Policy that defense and military officials have said stockpiling requirements mandated by U.S. war plans are behind the American military aid’s slower pace to Ukraine in recent months.

“They’re applying it across the board to Stinger, Javelin, 155 [millimeter artillery], and GMLRS [munitions],” one congressional aide said, speaking on condition of anonymity to describe the internal debate. GMLRS stands for Guided Multiple Launch Rocket Systems. “It’s one of their driving rationales for going at the slow pace that they’re going at.”

Frustration from Capitol Hill over the possible roadblock to assistance comes as the Biden administration announced on Friday plans to send $275 million more in U.S. military aid to Ukraine—one of the smallest weapons packages since the beginning of the war. Some in Congress are worried that recent U.S. aid packages—which have focused on providing artillery ammunition, air defense weapons, and winter gear—are increasingly divorced from the reality on the battlefield and aren’t enough to help Ukraine win the war. The administration has also faced withering criticism on Capitol Hill over fears that long-range systems, such as ATACMS, could be considered escalatory and provoke Russia.

Under U.S. law, the Pentagon’s top military officer, Chairman of the Joint Chiefs of Staff Gen. Mark Milley, is required to regularly submit munitions requirements to Congress for each war plan on the agency’s books, known in Pentagon parlance as operational plans (or OPLANs). Most of the munitions that the United States is giving to Ukraine—such as NATO-standard 155mm artillery and multiple launch rockets, for instance—are earmarked for fighting Russia or North Korea.

But the lack of changes to the plans since Russia’s full-scale invasion of Ukraine in February has frustrated lawmakers and aides, who have called for more of the weapons put aside for a hypothetical fight with Russia to be sent to Ukraine, which is actually fighting Russia now. As the pace of U.S. military aid to Ukraine has slipped since the summer, concern on Capitol Hill is that the United States is holding back weapons for a Europe-wide conflict that Russia may not be prepared to fight, when Ukrainian troops are already degrading the Russian military on the battlefield.

“The OPLAN versus Russia is the same one it’s been for the last decade,” said a second congressional aide familiar with the debate, speaking on condition of anonymity to describe behind-the-scenes discussions. “We haven’t adjusted that based on the fact that the Ukrainians have essentially neutered the Russian army. So we have a plan in place to deal with the Russian army as we thought it was a year or two years ago.”

In recent weeks, both sides have been running short on ammunition, with Ukraine complaining of acute shortages of artillery shells and air defense missiles and Russia going to Iran and North Korea to backfill dwindling supplies of artillery and missiles.

But even as top U.S. defense and military officials have warned about dwindling U.S. military stockpiles, congressional aides insist that weapons are still being left on the shelf. The problem isn’t dwindling stockpiles, they said, but that the United States can’t build munitions fast enough to replace what’s being given to Ukraine.

“It’s really rich that all these people are now concerned about stockpiles because we’ve almost never been at the total munitions requirement for any munition and nobody gave a shit for years,” the first congressional aide said. “If we revise the Russia requirements, we would feel completely comfortable. It’s hard for me to see how we can’t go way deeper if we’re seeing the effects like we’re getting today.”

And the response from the Biden administration about why it can’t change the plans hasn’t satisfied critics on Capitol Hill. “The response back to why they haven’t [changed the plans] has been less than compelling, other than, ‘it’s hard,’” the second congressional aide added.

But the intramural fight points to an age-old debate between Capitol Hill and the White House that dates back to the Obama administration, when U.S. officials held off on sending lethal assistance to Ukraine after Russia’s 2014 seizure of Crimea in an effort to prevent further escalation. Although the Biden administration has sent unprecedented amounts of weapons to Ukraine, it has often done so only after intense deliberations about the potential impact on Russia’s calculations over expanding the war, frustrating some in Washington who are concerned that U.S. President Joe Biden’s team is worried about the consequences of a Ukrainian victory.

The U.S. Defense Department declined to comment specifically on its munitions inventory or deliberations with Capitol Hill. Lt. Col. Garron Garn, a Pentagon spokesperson, told Foreign Policy that the agency would not “go below our readiness requirements” in supporting Ukraine.

“In selecting specific systems over others, the departments take into consideration what the readiness impacts are of drawing down that equipment from U.S. stocks,” Garn said in an emailed statement. “We are working to replenish U.S. inventories and backfill depleted stocks of Allies and partners.”

Western officials believe that it will take Russia about five years to reconstitute its ground forces and ammunition holdings given stifling U.S.-led sanctions and export controls that have decimated the supply of computer chips and other guided missile parts to the Kremlin as well as forced Moscow to lean on Iran and North Korea to backfill dwindling supplies.

But former U.S. officials who were surprised by Russia’s 2008 military victory in Georgia and the lightning-fast illegal annexation of the Crimean Peninsula in 2014 are worried that officials now might be counting out Moscow too quickly.

“My fear is that’s the signal that’s going to be sent to other allies, that they can do that too,” said Jim Townsend, a former deputy assistant secretary of defense for NATO and Russia. “But other allies don’t have those kinds of margins. And if they say, ‘Hey, look, the U.S. is doing it. We should do it too,’ and then we’re really kind of potentially screwing ourselves because Russia has been known to always come back.”

The intramural squabble comes as the Pentagon and Congress are ironing out the final elements of a new deal that would keep American production lines hot. Defense News reported this week that the U.S. Army is seeking a significant ramp-up in the production of NATO-standard 155mm artillery shells over the next three years, almost tripling production to around 40,000 rounds per month by 2025. The White House has also earmarked nearly 60 percent of its new $38 billion request for Ukraine aid for equipping Kyiv’s military and replenishing Pentagon stocks.

Milley said the Defense Department has begun to fix risks to stockpiles. “We believe we’ve mitigated that to an acceptable level to maintain a steady flow of supplies to Ukraine,” he said at a Wall Street Journal forum on Tuesday.

But even as production lines are starting to move again, there is concern in Washington that Ukraine is burning through ammunition too fast to try and take the fighting to a wounded Russian force during the winter.

“There’s a concern about their burn rate,” Townsend said. “They can make it harder for us to give them what they need if they just burn through it thinking that it’s a gravy train of ammo—and it’s just not.”

The Pentagon’s newly litigated argument that more munitions could be needed for other conflicts comes as Milley has seemingly become more isolated within the Biden administration in pushing for talks between Ukraine and Russia, the New York Times reported.

But some former officials believe that the argument that Ukraine aid could impact munition requirements for other contingencies strains credibility, after multiple past administrations have ignored dire munition shortages. “It’s like people are arguing about pennies when there are $100 bills on the table,” said Jeb Nadaner, a former U.S. deputy assistant secretary of defense for industrial policy. “If there was a failure of a contingency plan, it would be very hard to say, ‘Well, shipment of those munitions to Ukraine, that was really the cause of the deficit.’”

Congressional aides have complained that U.S. aid packages to Ukraine are becoming increasingly divorced from the reality on the ground, with around $400 million going to Kyiv every couple of weeks—far less than what was being provided during the summer months, when the United States began providing the High Mobility Artillery Rocket System that Ukraine used to devastating effect against Russian lines.

“The administration doesn’t actually want to go faster in Ukraine,” the first congressional aide said. “That’s very clear to all of us.”

Share
Facebook
Twitter
Pinterest
WhatsApp
Previous articleDismayed by the Disclosure of the FTX Money Laundering Scheme, American Dems have Blocked an Audit of Billions of Dollars of Military and Economic Aid to Ukraine
Next articleThe NWO has been a Coordinated Effort that has Evolved Banking Cartels, Tech Companies, Pharma Companies, Media Conglomerates, the Education System, and the Deep state