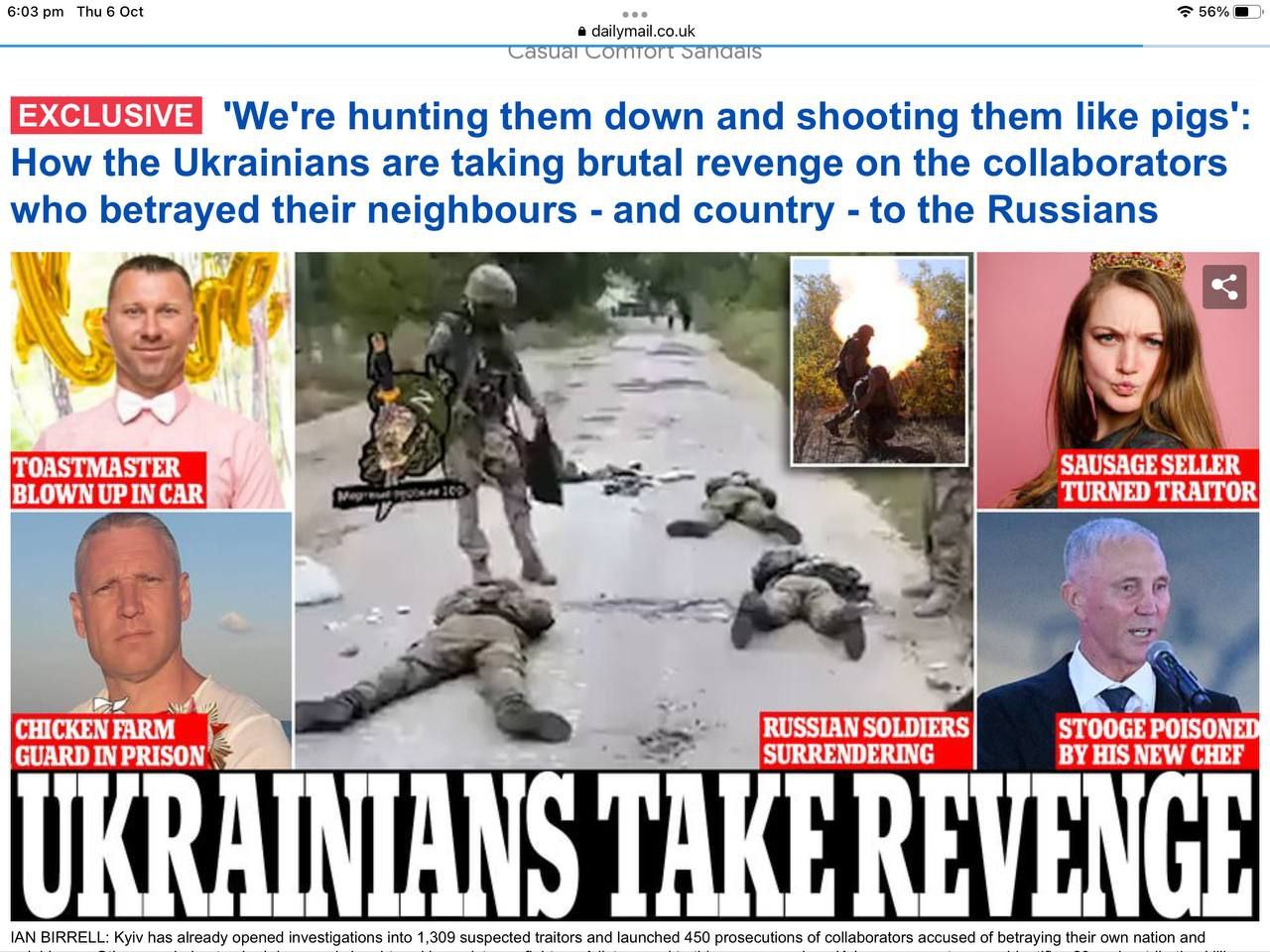 The Daily Mail stoops to a new low by celebrating the genocide and murder of Russians in areas retaken by Ukrainian/NATO forces.

No. This is not a screenshot of a nazi hate speech forum.

Yes. This is today’s headline in the DAILY MAIL.

Is it appropriate or even legal for MSM to publish such vile and “hate speech” content?

Meanwhile, the @AussieCossack gets 10 months jail for mentioning a name of…..

Everybody needs to complain to: https://www.presscouncil.org.au/complaints/make-a-complaint

We’ve Had Enough of These Fairy Tales

Rishi Sunak launched his campaign to become leader of our country with a slick video that asked two simple questions: “Do we confront this moment with honesty, seriousness and determination? Or do we tell ourselves comforting fairy tales that might make us feel better in the moment, but will leave our children worse off tomorrow?” These are important issues after the toxic reign of a cavalier populist who took the voters for fools, believed in nothing beyond himself, and whose premiership collapsed under the weight of his own arrogance and deceit.

Sunak is sensible, smart and compassionate. Having raised the issue of trust, however, he still needs to explain why he clung to his United States Green Card for six years as an MP, even when serving as chancellor, and also he needs to clarify his wealthy wife’s non-domicile tax status. Like all the other ministers and ex-ministers who propped up Johnson in power, he should also tell the public how he can pose as a person of integrity having defended the bungles, deceptions, parties and stunts of a corrosive character who should never have been allowed near Downing Street.

The former chancellor was seeking to shore up his own position as favourite to succeed Boris Johnson with his questions. His eight declared rivals – along with the Prime Minister’s last remaining loyalists – have started sniping over his record in office, which saw the size of the state swell in a public-health crisis, partly funded by substantial tax rises that arrived amid a darkening economic climate.

But Sunak is right. This country does need honesty and seriousness from its politicians after the ejection of a buffoonish charlatan, which is why the early skirmishes in the latest Tory leadership battle are profoundly depressing.

The problem is that our next prime minister will be picked by the MPs and dwindling membership of a party transformed by Brexit, which drove out many moderates and tacked hard to the nationalist right to thwart Ukip. This strategy worked in the 2019 election: voters were sufficiently frustrated by the Brexit logjam, terrified of Jeremy Corbyn, and seduced by Johnson’s bonhomie.

Now Brexit is clearly harming the economy, Labour is no longer scary, and Johnson proved a disaster – as some of us long predicted. Yet the winner of the Tory wacky races must woo the supporters – estimated to number about 100,000 – still holding on to party membership.

So we see even Jeremy Hunt and Tom Tugendhat, the pair of centrist candidates unstained by office under Johnson, supporting the disgusting Rwanda deportation plan for refugees, the nastiest policy dreamed up by Johnson’s abject government. Sajid Javid, a man who has left no discernible trace in six different cabinet posts, desperately claims to be a born-again Brexiteer in a party that pretends the breach with Europe was a success. Liz Truss cosplays as Margaret Thatcher. Even Sunak joins the abrasive culture warriors on the hard right seeking to exploit the struggles of transgender citizens for electoral advantage with his dismal first policy proposal of a crackdown on gender-neutral language.

But tax is the issue that has rapidly established itself at the heart of this tussle for power, with Sunak’s rivals offering a range of cuts. Javid is the early winner of this Dutch auction by offering £39bn in giveaways, even shamelessly dismissing the idea of a national insurance rise to help health and social care that he backed a few weeks ago. Indeed, if there is any discernible consensus emerging, it seems to revolve around a view that Johnson devastated their party’s ideological foundations as he flailed around the spectrum and there is a need for “real” conservatism.

Yet already we are spending more than we take in tax receipts, so any tax cuts will have to be funded by borrowing more or slashing spending. Last week, the Office for Budget Responsibility warned that public finances are on an “unsustainable path” and the debt burden might more than treble without further tax rises to cover the costs of an ageing population and falling fuel duties.

Meanwhile, Russia’s attack on Ukraine shows the urgent need for higher defence spending, as several Tory leadership candidates rightly point out. The NHS, already soaking up about half of daily public spending, has a huge backlog and comparatively bad outcomes in many areas. The mental-health system is a mess – and like many children’s services, often outsourced to appalling private operators. Social care, far from being fixed as promised by Johnson, is collapsing. Housing is far too expensive, thanks to shortages and planning failures. Childcare is unaffordable for many parents. The benefits system is too bureaucratic.

Throw in rising inflation, which sparked sizeable pay demands in the public sector, and the sense only grows that these tax-cutting zealots are living in a dream world – or deceiving the electorate. Yes, it is a long-standing strand of conservatism to champion low taxes, low regulation and low state spending. But if these people standing to lead the country want to restore integrity and trust to politics, as they all profess, they need to level with voters and start explaining where they will find savings to fund these reduced taxes, given our creaking public services.

There are so many vital issues being ignored by Westminster with its simplistic talk of tax while millions of citizens struggle with failing, faltering and floundering public services. We need to find solutions to serious problems confronting our public services. Instead, disingenuous politicians seek to bribe voters while ignoring concerns that plague millions. Perhaps we need to demand leaders offering real honesty, depth and seriousness rather than electing any more of those glib folk, telling fairy tales to the electorate..