Several People Have Alleged they Were Raped Inside NSW Parliament Workplaces in the Past Five Years, According to a Horrifying New Report

Several People Have Alleged they Were Raped Inside NSW Parliament Workplaces in the Past Five Years, According to a Horrifying New Report 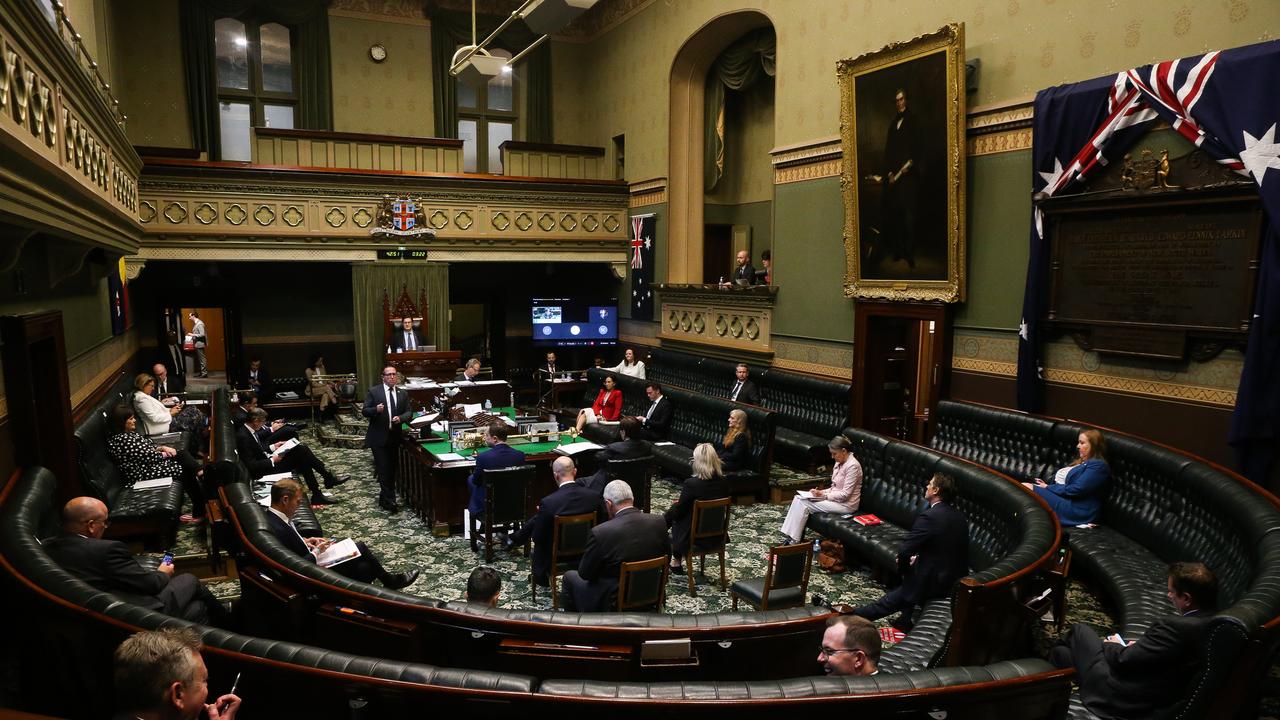 Shocking report on bullying and harassment in NSW parliament

A bombshell report on bullying and sexual harassment inside the NSW parliament has triggered “a moment of reckoning”.

A moment of “reckoning” could be coming for the NSW parliament after several people alleged they were raped inside its workplaces in the past five years.

The claims were made by five people who said they were victims of either rape or attempted rape.

A review of workplace bullying and sexual harassment by former sex discrimination commissioner Elizabeth Broderick was released on Friday and will send shockwaves through state parliament.

It paints a picture of the parliament as a dysfunctional, sexist, elitist and alcohol-fuelled workplace where some MPs enjoy humiliating staff and making them cry and where sexual harassment and homophobic comments are not uncommon.

The review describes some MP’s offices as “well-known” bullying and harassment “hot spots” and says the tormenting of staffers goes on at a ”systemic” rate across the parliament.

“(Unnamed MP’s) office is well known as the worst office,” one staffer told the review.

“(They) enjoy bringing grown men to tears. Employees are bullied, traumatised and no legitimate action can be taken.” 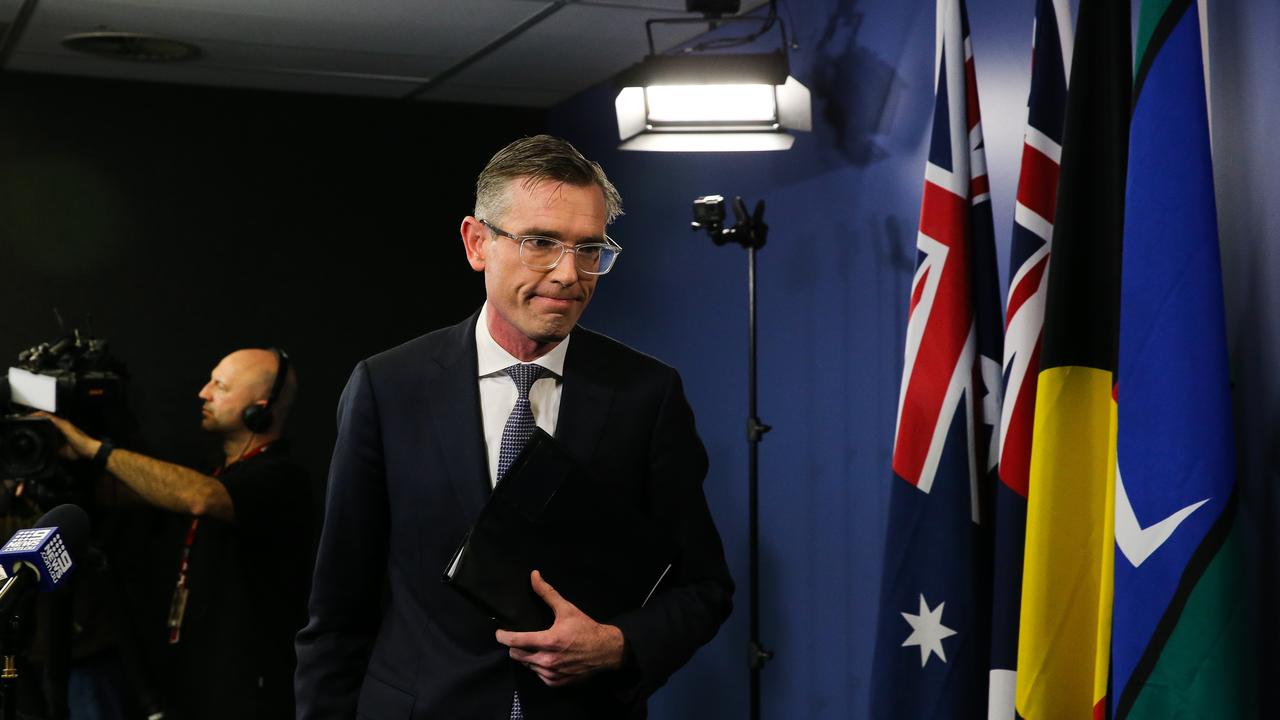 A sombre Mr Perrottet said on Friday morning the report made clear the parliament was not a workplace that was free from sexual harassment and sexual assault.

“Clearly, we have a culture in the NSW parliament that over time has become, in many instances, toxic and is wrong,” he said.

“If parliamentarians cannot lead and provide an environment where the workplace is safe, what hope do we have for other workplaces across our great state?

“This report will be the beginning of a change in workplace culture.

“This must end. It ends today, and we will work very closely with all sides of politics to implement change for the betterment of workplaces in the NSW parliament.” 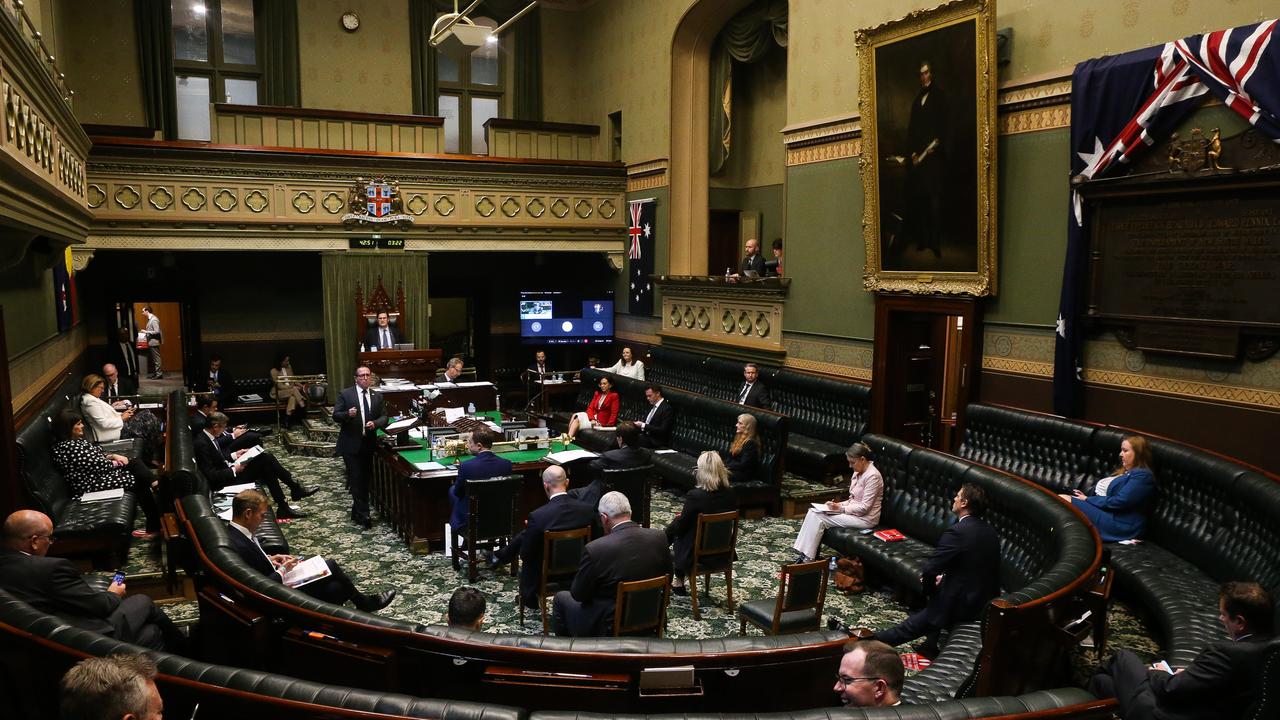 The report found it wasn’t uncommon for MPs to speak to staff in the same rude and offensive way they speak to each other in the ‘bear pit’, as the floor of parliament is known.

“Neither side, or any side in politics, comes to this issue with clean hands,” he told reporters.

The alleged rapes and rape attempts happened to three men and two women, according to an anonymous survey performed by Ms Broderick.

It wasn‘t clear how many were reported attempts as opposed to actual sexual assaults.

“People with a diverse sexuality were over-represented among those who had experienced actual or attempted sexual assault,” Ms Broderick wrote.

Survey data indicates all rape victims were aged under 55, with most aged between 25 and 34.

One-fifth of MPs told the survey they had heard about or witnessed sexual assault in the workplace.

Out of the survey respondents who said they had heard of sexual assault, 56 per cent said it had been perpetrated by staffers working for MPs, and 15 per cent said ministerial staff had done it. More than a third of the sexual assault incidents that respondents said they had heard about took place in Parliament House.

Other places where people had heard of rapes occurring included at after-work drinks.

Some of the victims who reported their rape to the survey also told of their trauma in one-on-one interviews with Ms Broderick’s staff.

“Of those who (said) during interviews that they reported the incidents, none were provided with any meaningful support or validation of their experiences,” Ms Broderick wrote.

“All those who shared stories of sexual assault with the review team via an interview were women who had been sexually assaulted by men.

“This may indicate that there are additional barriers for men, especially gay and bisexual men, and for trans and gender diverse people, to share their experiences.”

The review found that because MPs were handed enormous power and entitlement within their own offices, despite often having no previous experience of managing people, they often made terrible bosses.

The rude and offensive way MPs speak to each other on the floor of parliament – a place known as the “bear pit”, where the ability to make opponents look and feel bad is seen as a strength – is not uncommon in offices and corridors either, Ms Broderick found.

“There is a real drive among some MPs to humiliate staff in front of others,” one person said.

“They are pretty dismissive, with an attitude of ‘I’m elected and you are not’.”

Another said: “For some staff, they are told from 7am to 7pm how stupid they are.”

There were claims senior staff were behind some of the bullying as well.

“The senior electorate officer wants me to fail, (they) yell at me, (they) pull me up on anything, (they) love a good group humiliation,” one person said.

“All day it goes on, it is exhausting. I am being actively crushed by one person, I believe in the party, but my office is a shitshow.”

Ms Broderick said the big power imbalance between MPs and having no “central point of leadership” in the workplace allowed harmful behaviour to go on in some offices. 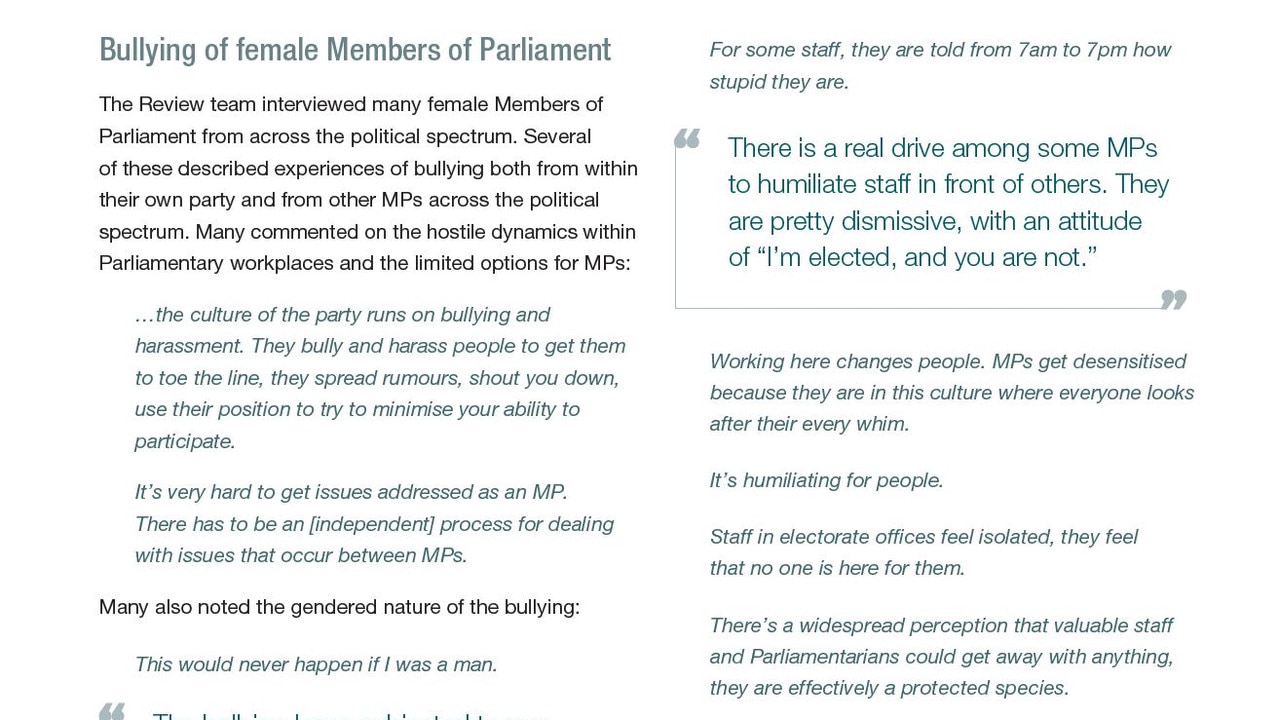 Female MPs were among the bullying victims.

Staffers also have limited access to human resources support and can be fired at a moment’s notice and without recourse.

“There is a huge power imbalance in parliament,” one staffer said.

“It is so hierarchical. Members are at the top and they are not accountable for their behaviour at all. Staff are at the bottom and have few, if any, rights.”

A majority of survey respondents said drinking alcohol in the workplace was seen as acceptable, and many said it was contributing to, but not causing, harmful behaviours.

Most wanted drinking to continue being allowed, believing parties in offices were safer than driving alcohol consumption “underground” or to nearby bars ”where there is even less protection”.

Many respondents also said sexual harassment was rife and normalised across the parliament.

“The amount of MPs that I saw try to make sexual advances on young men and women at party social events was pretty much constant,” one person said.

“I had a colleague … who was quite handsy, patted me on the bum,” said another.

Another said a parliamentarian would often comment on their female colleagues’ clothing and looks, at one point remarking, “Jeez your boobs look good in that”. Five people who responded to the survey said they had experienced actual or attempted sexual assault.

Some people who spoke to the survey said certain MPs would only hire females that were “good looking and under a certain age”.

“It felt like the 1970s, old rich white men employing these beautiful young women in their 20s,” one person said.

“People would come to the office and joke, ‘(This MP) always employs the lookers’.”

The review spoke to 109 people in confidential one-on-one interviews, received 58 written submissions and heard from 447 people who participated in the survey. The report findings will rock parliament.

A staffer who spoke to the review told NCA NewsWire they hoped the report’s release would help change the place.

“I hope MPs take a long, hard look at themselves and their colleagues,” the person said.

“This report shows that for too long male MPs have been allowed to get away with some of the worst behaviour imaginable in the halls of parliament.

“I hope this review will be the start of a reckoning and send a strong message that bullying, harassment and assault will not be tolerated in that place anymore.”