According to Reuters, when asked about claims that Russia is requesting military help from China, the spokesperson for China’s embassy in Washington responded “I’ve never heard of that.”

The spokesperson, Liu Pengyu, said China’s priority was to prevent the tense situation in Ukraine from getting out of control.

“The current situation in Ukraine is indeed disconcerting,” he said in an emailed response to a query from Reuters, adding that “the high priority now is to prevent the tense situation from escalating or even getting out of control.”

Earlier when commenting on what’s been reported as “significant progress” made in Russia-Ukraine talks, we noted that “It remains to be seen if this is the start of a peaceful resolution to the war or just another false dawn.” Well, just a few hours later the false dawn has arrived via a bombshell FT report citing anonymous Biden administration officials who say that Russia has issued a formal request from China for military support in its invasion of Ukraine. This was followed minutes later with similar Washington Post and New York Times stories in what looks like a US “coordinated leak” effort to send a message and warning to China.

“Russia has asked China for military ​equipment to ​support its invasion of Ukraine, ​according to [anonymous] US officials, sparking concern in ​the White House that Beijing ​may undermine western efforts to help Ukrainian forces defend their country,” FT writes. 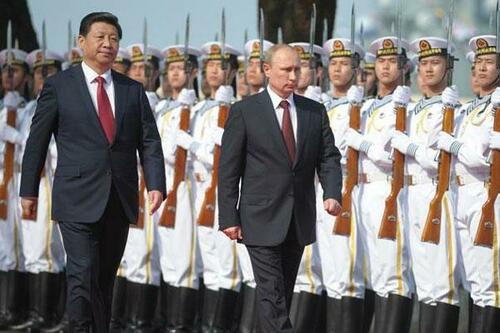 It’s been no secret that Russia’s military has been losing a more than expected amount of tanks, armored, carriers, planes, and helicopters, although precise numbers remains conjecture. The Washington Post also recently observed that regardless of Russia’s overwhelming troop numbers, battlefield setbacks and losses have been “costlier” than the Kremlin likely calculated a mere little more than two weeks in.

Since there are precious few details from the FT’s anon sources, the key question is whether this is another US intelligence attempt to preempt the very scenario being asserted as confirmed before it actually happens (akin to repeating official intel leaks in the run-up to the Feb.24 invasion of Ukraine).

State Department darling Washington Post quickly chiming in with its own version of the anonymously sourced story makes it appear that this is what’s happening: 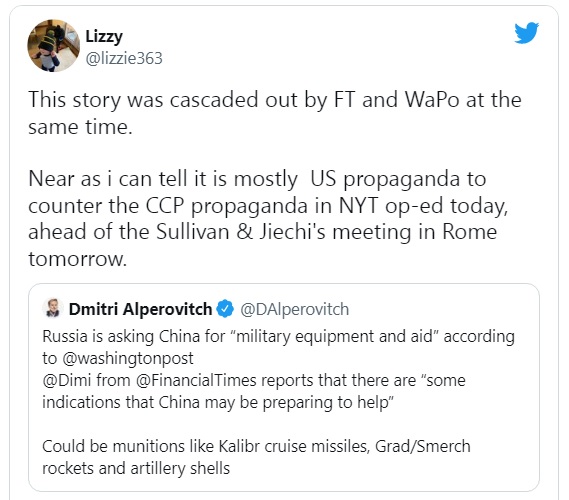 The FT report hints at this in the following:

“Another person familiar with the situation said the US was preparing to warn its allies, amid some indications that China may be preparing to help Russia. Other US officials have said there were signs that Russia was running out of some kinds of weaponry as the war in Ukraine extends into its third week.”

Perhaps also the preemptive leaking of this information to FT is meant as a warning of sorts to build leverage before White House national security adviser heads to Rome for Monday talks with China’s top foreign policy official Yang Jiechi. The meeting was earlier described as an effort to “maintain open lines of communication” between Washington and Beijing on the Ukraine crisis.

As Bloomberg reports, Sullivan right before departing for the official trip put Beijing on notice concerning any level of sanctions evasion cooperation between China and Moscow. Here’s what he said in a CNN interview Sunday:

…the U.S. has warned China against helping Russia evade sanctions and is watching the extent to which it provides “material support or economic support” to Russia.

“We will not stand by and allow any country to compensate Russia for its losses from the economic sanctions,” Sullivan said. Large-scale sanctions evasion or providing support that allows Russia to “backfill” will have “consequences,” he said, without elaborating.

The WaPo story was out almost simultaneous to the FT and NY Times versions: 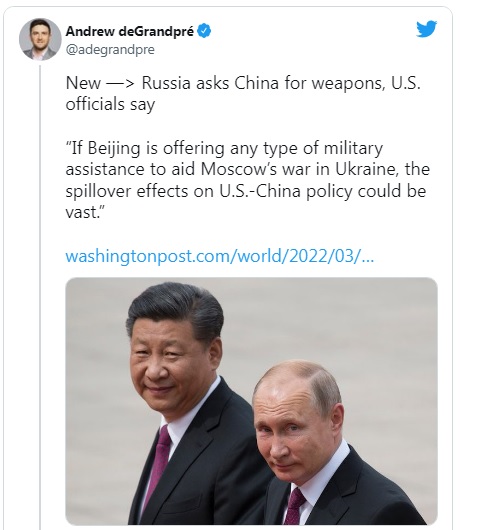 Sullivan also said the US is warning China not to “bail out” Russia by helping Moscow in sanctions-busting efforts. So now it appears there’s a double-warning coming out, with Beijing being put on notice about military equipment and possible plans to assist Russia in Ukraine.

Share
Facebook
Twitter
Pinterest
WhatsApp
Previous articleMcIntyre Report Political Talk Show – Episode 98 – Jamie Interviews London Correspondent, Laura Aboli Re The Aggressive Propaganda Being Used Against Russia As Was Used Against Us With The Covid Fraud And Why? Part 1
Next articleThe Real Story of November 3rd