Pregnant Mum Arrested in PJs During Lockdown Has Charges Dropped

Pregnant Mum Arrested in PJs During Lockdown Has Charges Dropped

Pregnant mum arrested in pyjamas in front of her kids for criticising ‘tyrant’ Dan Andrews on Facebook during Victoria’s grinding lockdown has ‘incitement’ charge sensationally dropped.

A mother who was pregnant when she was handcuffed and arrested in her own home over a Facebook post allegedly inciting an anti-lockdown protest in Victoria has had the charge sensationally dropped.

Zoe Lee Buhler, 30, was handcuffed in her lounge room in front of her children and partner in September 2020 and charged with incitement.

A Victoria Police spokeswoman told Daily Mail Australia it had been withdrawn in ‘the public interest’.

‘Victoria Police has withdrawn the single charge of incitement against a 30-year-old Miners Rest woman.

‘This follows an individual assessment of the case where it was determined that it was not in the public interest to continue with the prosecution,’ a statement read.

Several officers had entered Ms Buhler’s house in Miners Rest, Ballarat, northwest of Melbourne, with a search warrant and began reading the young mother her rights.

‘Excuse me, incitement for what, what on Earth? I’m in my pyjamas, my two kids are here,’ Ms Buhler said upon her arrest.

‘I have an ultrasound in an hour because I’m pregnant.’

After all of the tyranny he’s put us through, you know, just to be held accountable for his actions. It would be beautiful to see
Ms Buhler’s alleged offending post linked to a ‘Freedom Day Ballarat’ event she created for that weekend.

At the time, country Victorians were in the midst of another Stage 3 lockdown, which restricted movement.

‘Anyone from Ballarat please join us in our fight for freedom and human rights!’ Ms Buhler wrote with a link to the event page.

The increasingly distressed mother had insisted she wasn’t breaking any laws by creating and then promoting the event.

‘Actually you are, that’s why we’re arresting you in relation to incitement,’ police replied.

Ms Buhler offered to delete the post as her boyfriend James Timmins tried to mediate while cradling their infant child in his arms.

‘How about she just doesn’t do the event? It’s not like she’s done it, she made a post,’ he said.

Police were unmoved, telling her: ‘You’ve already committed the offence.’

Ms Buhler was distressed by this point and crying so much she could barely tell officers that she ‘didn’t realise’ she was ‘doing anything wrong’ in making the online event.

Police said they would seize all electronic devices in the house including those belonging to Mr Timmins and Ms Buhler’s sister.

Ms Buhler was later charged with incitement and released on bail.

On Monday, Ms Buhler, now aged 30, lashed out at Mr Andrews as she walked free from court.

‘My message for Dan Andrews would be that I hope one day that you’ll have your day in court,’ she said.

‘After all of the tyranny he’s put us through, you know, just to be held accountable for his actions. It would be beautiful to see.’

Ms Buhler said her ordeal had deeply impacted her life over a period of time that saw Victorians restricted to their homes for longer than any other population on the planet.

The court heard the Office of Public Prosecutions, headed by Kerri Judd, QC, would pay Ms Buhler’s legal costs over the disgraceful prosecution.

‘The strain on my mental health. I believe I have experienced (post traumatic stress disorder), especially when I see police officers and stuff,’ Ms Buhler said.

‘Dealing with my children, you know not understanding why mummy was arrested. We all want our kids to run up to police if they need police, but you know things like this have made people, especially children, scared of police … get the bad guys, not the good guys.’

Ms Buhler said she has not ruled out pursuing civil action against Victoria Police and the State Government over her treatment.

The mother of three described Victoria Police’s pursuit of her as ‘ridiculous’.

‘They dragged it out for so long. I’ll be considering my options going forward, especially in regards to being handcuffed while pregnant,’ she said.

The withdrawal of charges by Ms Judd against Ms Buhler are the latest in a growing list of supposed ‘lockdown rebels’ being let off the hook.

In July Jemal Abazi walked free from court almost two years after he was charged for encouraging Dandenong locals to walk together for their allotted one-hour period of exercise during Victoria’s second hard lockdown in August 2020.

The vocal anti-vaxxer had spent 22 days in jail after refusing to comply with a series of bail conditions which were later scrapped by the Supreme Court of Victoria.

Retired pensioner Solihin Millin also had his charges dropped in July after being charged for inciting the ‘Freedom Rally’ at Melbourne’s Shrine of Remembrance in September 2020.

The 78-year-old had been charged with inciting others to protest.

Tens of thousands of ordinary Victorians were fined by a militant Victoria Police during the state’s six hard lockdowns.

In May, a state budget estimates inquiry heard more than 50,000 fines were handed to Victorians for breaching Covid-19 restrictions, but half had not been paid.

Of those, almost 40,000 were issued for ‘general breaches’ and another 1,723 fines for ‘illegal gatherings’. 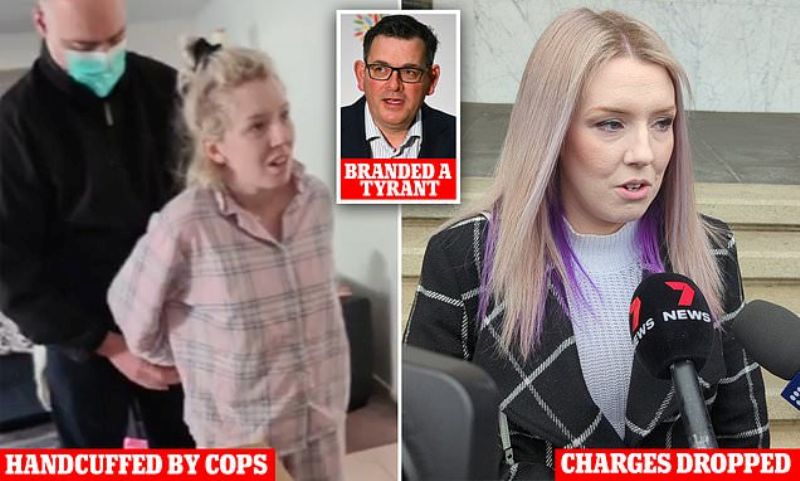