Phone Call Records Shed Light on What Happened Near Kiev

Phone Call Records Shed Light on What Happened Near Kiev

Recordings obtained by RT paint a different picture regarding civilian deaths and looting near the Ukrainian capital.

Ukrainian and Western media outlets have accused Russian troops of killing civilians in Bucha and other towns around Ukraine’s capital, Kiev in the past month. Excerpts of phone calls obtained by RT, however, appear to contradict some of the allegations and seem to paint a different picture of the situation on the ground.

Ukraine’s President Volodymyr Zelensky claimed, on Thursday, that the situation in settlement of Borodyanka is “much more disastrous” than that reported in Bucha, about 25 kilometers (15.5 miles), to the southeast. Moscow has strongly denied the allegations and accused Ukraine, and its Western backers of trying to “frame” its personnel.

RT was unable to independently verify the authenticity of the recordings. In what appears to be an excerpt from a satellite phone call, an alleged reporter identified only as ‘Simon’ tells his colleagues he visited Borodyanka and found that “there’s no bodies in the streets at all,” contrary to what he was led to expect.

The town has been “shelled to pieces,” he outlines, “but there’s no evidence of any rights abuses here at all.” Simon claims that he and his crew interviewed multiple residents who said the Russian troops had been very friendly and gave them food and water and other supplies. “And we got quotes on camera for that,” he adds.

“I don’t know what the prosecutor was talking about, but we have seen nothing like that at all. It’s a completely different picture,” he continues, adding that a French journalist may have seen the body of someone killed by shelling, but “no executions.”

The alleged reporter ends the call by saying he was going back to Bucha, to “try and find some more evidence of extrajudicial killings there, but there’s no sign of any of that here.”

Ukraine accused Russia of murdering over 400 civilians in Bucha before retreating from the town near Kiev last week. The US and its allies have backed Kiev’s claims, citing them as reasons to impose more sanctions against Russia.

Moscow has categorically denied the accusations, saying that Russian troops pulled out of the town on March 30, and that claims of killings appeared only four days later – after Ukrainian security forces and TV cameras arrived in the town.

Another recording obtained by RT seems to depict a conversation between two Ukrainian Security Service (SBU) officials. The SBU is the local successor agency to the Soviet KGB.

They discuss the situation in Kukhari, a town about 60 kilometers (37 miles) northwest of Bucha, and seem to contradict the prevailing media narrative coming from Kiev and the NATO capitals.

“From March 24 to April 3, after we pushed the ‘orcs’ away from here,” says a person only identified as Sergey Anatolyevich, speaking to someone named Lesogor and using a derogatory Ukrainian term for Russians. “After the unit that pushed them out moved on, the territorial defense came from Malin … and marauded during that time. Looted everything they could. Broke down doors, everything. Safes were opened, cars were stolen. They stuffed the cars with everything worth anything and took it away,” he adds.

“It turns out the ‘Moskals’ took nothing, but ours went in and looted everything,” Sergey Anatolyevich adds, using another derogatory term for Russians. Malin is a nearby town southwest of Kukhari, held by the Ukrainian military.

When Lesogor asks which unit was looting, Sergey Anatolyevich replies that no one really knows. “Some say Volhynian, others say someone else,” he says, referring to a region in western Ukraine.

Moscow attacked the neighboring state in late February, following Ukraine’s failure to implement the terms of the Minsk agreements signed in 2014, and Russia’s eventual recognition of the Donbass republics of Donetsk and Lugansk. The German and French brokered Minsk Protocol was designed to regularize the status of the regions within the Ukrainian state.

Russia has now demanded that Ukraine officially declare itself a neutral country that will never join the US-led NATO military bloc. Kiev insists the Russian offensive was completely unprovoked and has denied claims it was planning to retake the two regions by force. 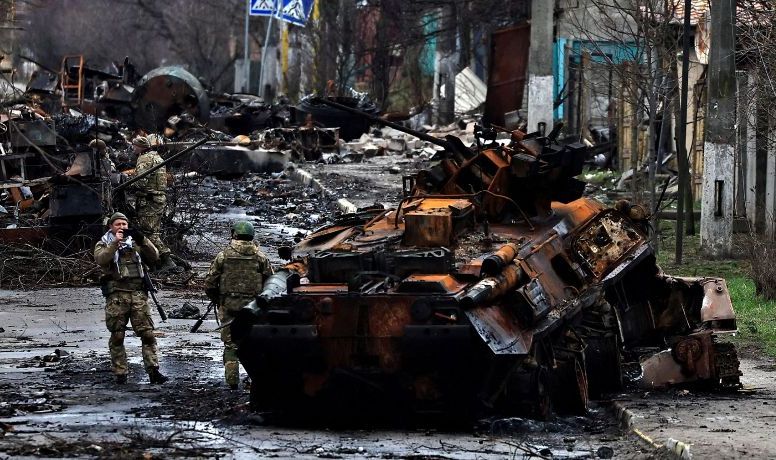