GB News’ Mark Steyn has been lambasted as “Russian propaganda” for daring to question US-funded biolabs in Ukraine, and claiming “it’s getting harder to know who the good guys are”.

Steyn’s eight-minute speech targeted Dr Anthony Fauci’s involvement and apparent cover-up of US gain-of-function research at the Wuhan Institute of Virology, and slammed the “court eunuchs of the legacy media” for insisting the Ukrainian biolabs were innocent.

“Ukraine is the most corrupt country in Europe,” he continued. “But apparently its global reputation for cutting-edge, state-of-the-art research is such that US taxpayers are funding Q-fever labs in Odessa.” 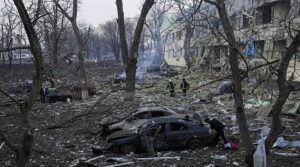