The Briton told RT that he came to help civilians, but was pushed into combat by Ukrainian officers.

Andrew from Plymouth says he traveled to Ukraine to treat wounded civilians, but within weeks, he found himself shelled, shot, and captured. Recovering in a hospital, he told RT that he and his fellow volunteers were “manipulated” into the very duty they swore to avoid.

Andrew, a 35-year-old who worked as a scaffolder back home in Britain, was attached to a unit of Ukraine’s International Legion near Nikolayev when he came under a devastating Russian artillery barrage. Russian troops fired on his position, Andrew was hit in the arm with a bullet, and he surrendered.

“I wasn’t there to fight so I surrendered,” he told RT. As for his teammates who fought, “They were killed,” he explained.

Andrew said that he never intended to participate in, or even get close to, combat. Watching media reports about the conflict in Ukraine in March, he said he got the impression that “Ukraine was asking people for help,” and contacted the Ukrainian Embassy.

Leaving his children behind, he flew from the UK to Poland, and made his way to the Ukrainian border. After a brief stint “helping refugees” there, he said he was approached by a man named ‘Jacob’ from the International Legion, who told him that his basic medical experience – gained with the British military – could be put to use further inside Ukraine.

“I feel sad,” he told RT. “I do feel that I’ve been lied to, massively. Not just by the Foreign Legion, but I feel like I was lied to back in the UK through the Western media.” Andrew said that news reports of “people all coming over helping, going to Ukraine, helping Ukraine,” made the trip seem like an easy prospect.

Once inside Ukraine, Andrew recalls traveling to a building in Lviv, where he and a cohort of foreigners were kept indoors for several days, allegedly for their own safety. Although he served in the British Army, Andrew said that he had no combat experience, and that volunteers like him were kept separate from veterans who came to Ukraine to fight.

From there, the group was bussed to Yavoriv – where a training center for foreign recruits had been destroyed by a Russian missile – and then to Kiev, where a Ukrainian handler told them that the situation would be similar to that in Lviv: “‘You will be locked down, you can’t leave the building, you have to stay in, you will be fed, water will be provided to you, wait until further instruction.’”

Andrew’s first interaction with Ukrainian civilians came at the beginning of April in the town of Bucha, where he said that he cooked and distributed food. Although he arrived in Bucha after Russian troops had left, he said that he saw no signs of the war crimes that the Ukrainian government later attributed to the Russians there.

“I didn’t see any corpses myself, didn’t see anything, it looked untouched,” he recalled, adding that he remained on the outskirts of the town. “It all seemed normal. There weren’t any signs of any fighting.”

After only a day in Bucha, another bus ride took Andrew and his companions to Nikolaev, which he said was “closer to the front than I was aware of.” Even after he was moved up to a combat unit of six other foreigners outside the city, Andrew said that things seemed quiet. However, the day after he was sent to the front, the position was attacked.

“I got shot in my arm, broke my bones,” he told RT. As Russian troops advanced, Andrew lay on the ground with his good hand above his head, until a Russian soldier dragged him into a foxhole and administered first aid. “I’m very lucky to survive,” he recalled. “The Russian soldier that gave me first aid saved my life. The bullet cut my artery and I was bleeding out.”

Andrew’s captor offered him a cigarette before he was moved back through Russian lines for surgery and questioning. Currently awaiting two further rounds of surgery in a hospital under the authority of the Donbass People’s Republic (DPR), he told RT that there were many volunteers like him who ended up “in a situation that you don’t want to be in.”

“Everyone seemed to be normal people that wanted to help,” he said of his fellow volunteers, a group that included British, Canadian, American, German, and Danish members. However, he said that many felt “the same way as me,” in that they felt like they were “manipulated” into helping soldiers rather than civilians.

Since his capture, Andrew told RT that he was being treated “very well” in the hospital. “Everyone’s being very friendly. I’m receiving medical aid every day, being fed three times a day, I get water, tea, coffee, everything I need,” he explained. He said that DPR authorities are currently seeking to return him to the UK, but need the cooperation of the British Home Office and Ukrainian embassy in London to arrange the transfer.

Neither London nor Kiev are cooperating with the DPR’s requests, he told RT. 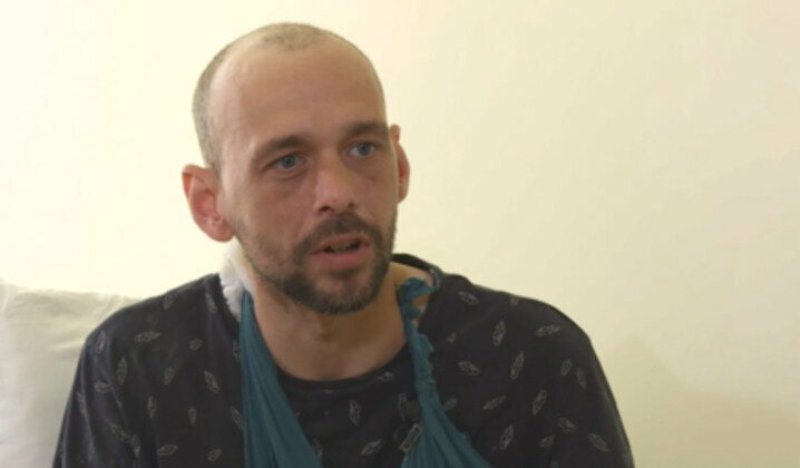 Share
Facebook
Twitter
Pinterest
WhatsApp
Previous articleSuddenly Bill Gates Confirms What We’ve Been Saying All Along: C0VID Is “Kind of Like the Flu” With a “Low Fatality Rate”
Next articleNazi Klaus Schwab Is Failing To Fool Many of Todays Youth With His Communist Great Reset Cult Manifesto