Acattle farmer accused of the execution-style murders of his three neighbours will remain behind bars for the next three months, as it’s revealed his gun licence renewal was rejected by police before the ban was overturned on appeal a decade before the tragedy.

Another son, Ross Tighe, survived after he was allegedly shot in the stomach and is now ‘up and about’ after he fled 40km to his next neighbour to seek help.

The magistrate held a special sitting prior to court opening on Monday morning to deal with the matter without any media present.

Young was refused bail and will be transferred from the watch house to a Queensland correctional facility until his next scheduled appearance on November 1.

Police believed he was ‘not a fit and proper person’ to hold a gun licence, and it was ‘not considered to be in the public interest’.

But Queensland Civil and Administrative Tribunal overturned the ban after Young successfully appealed, arguing he needed the firearms to kill feral animals that strayed onto his property and for his business.

Young argued he hadn’t broken any laws to prevent him from having a gun licence.

‘I hope the tribunal overturns the decision so I can have my licence.’

Young originally had a shooters licence which he later cancelled before getting a firearms licence in 1998.

The firearms licence was renewed in 2005 before being refused by police in 2010.

It’s unclear if Young had any further interactions with Queensland Police’s weapons licensing branch after the ban was overturned 12 years ago.

It comes as Daily Mail Australia revealed Bogie was founded during a gold rush and some residents – including the accused shooter – believe they are sitting on a gold mine. The alleged gunman shared photos of the gold, including one with a hand holding 17 specks of gold and another holding a huge lump to Facebook with the caption: ‘Some gold I found at Shannonvale this week since my exploration permits came threw (sic)’ Police will allege the neighbours fell out over boundary lines on their adjoining properties.

It’s understood most land parcels throughout Bogie – which is less a town than it is a single long, winding gravel road – do not have strict boundary lines. Instead there’s a ‘bit of give and take’.

Bogie was first populated in 1871 when a stockman from a nearby station struck gold on what is now known as Normanby Road.

About 30 miners were present when the Normanby gold mine first opened. They worked the land on and off for the next 41 years dreaming of hitting the jackpot.

A small township consisting of a hotel, dairy shop, bakery, three stores, two butchers and a blacksmith was even established as more gold bugs were lured to the area.

But the remoteness and unforgiving nature of the terrain made it too difficult to maintain.

Most abandoned the town shortly after arriving in favour of more profitable gold mines.

Some families in Bogie however still harbour hopes the gold that was too hard to find 150 years ago may one day be dug up on their properties. Maree and Mervyn Schwarz died from gunshots wounds, along with Maree’s son Graham Tighe. Another son, Ross, is in hospital Young claimed in 2017 that he’d found chunks of gold at his Bogie property, which was next to the land owned by the Schwarz-Tighe family (pictured)

Back in 2017, Young claimed on social media to have found enormous chunks of gold on the Shannonvale Road property at the centre of Thursday’s alleged mass shooting.

He shared several photos, including one with a hand holding 17 specks of gold and another holding a huge lump to Facebook with the caption: ‘Some gold I found at Shannonvale this week after my exploration permits came threw (sic)’.

‘Won’t be working for much longer if this keeps up.’

It was later established the photos were taken off a generic Google image search.

It is unclear whether or not gold does in fact remain in Bogie.

The single winding, gravel road through Bogie is an eerie drive at the best of times, locals say. Bogie, near Bowen in north Queensland (pictured on Map) only has about 200 residents

May 2021: The Schwarz family buy the 300-square-kilometre Bogie farm for $10million

9 am Mervyn and Maree Schwarz, and Maree’s sons Graham and Ross Tighe meet neighbours at the boundary lines of their properties. An altercation occurs and all four are allegedly shot.

Ross escapes and makes it to a property several kilometres away where he raises the alarm.

10 am: Queensland Police confirm they have sent units to a rural property following reports four people have been shot

11 am: Police announce they have located one man some distance from the property and he is being treated for gunshot wounds

4 pm: Police confirm three people have been found deceased at the Bogie property

7.15 am: Queensland Police Acting Superintendent Tom Armitt announces the alleged gunman has been taken into custody

Now every time they pass the nondescript turnoff en route to Collinsville from Bowen, they’ll be reminded of the tragic deaths.

A lonely bouquet of flowers has been left on the corner of Peter Delemothe Road and Normanby Road – the only way in and out of the isolated locality.

The 77km dirt track is a mobile phone black spot and the vast stretches of space between properties makes for a quiet journey. Graham Tighe bought the property with his mother and stepfather in May last year. He is pictured at a wedding

Warning signs line the first few properties on the street. They read: ‘Do not enter’, ‘Retreat’, and ‘Entry by invitation only’.

But even those faint signs of civilisation wane within 15 minutes, replaced by the potent smell of manure, herds of cattle and the odd kangaroo.

The Schwarz family property is some 70km down the narrow winding Normanby Road, strewn with rocks and gravel and lined by dried up creeks.

Kangaroos and enormous herds of cows are interspersed through the street and cross the road at their own leisure, making for a nervous drive – particularly around blind bends.

It’s easy to see why police said they were met with ‘tough’ conditions during the initial stages of the investigation on Thursday.

They were forced into unfamiliar terrain and first responders had to scour the dried creek beds and overgrown terrain looking for clues.

After a prolonged search, police were able to make contact with Young and four other associates who were taken in for questioning.

Young was charged with three counts of murder and one count of attempted murder.

He will face Proserpine Magistrates Court on Monday morning. Ross Tighe, pictured with his partner Kaitlyn, is recovering in hospital after allegedly being shot in the stomach

It’s believed young father Ross Tighe alerted authorities to the critical situation while suffering a gunshot wound to the abdomen.

The injured man had been able to make his way to another home – which police said was ‘many, many kilometres away’ from where the shooting on a remote property took place – and contacted the authorities.

He was flown to Mackay Base Hospital to undergo emergency surgery and was in intensive care in a serious but stable condition. He is now ‘up and about’.

‘He was able to tell police that he had been shot and three others (were) also shot,’ Inspector Armitt said.

‘We believe the male was able to extract himself from the area. He was fleeing from the scene.’

‘Originally, when the male person spoke to us, he was obviously in a very distressed state and there was some confusion about where the shooting had occurred.

‘We were able to conduct searches ourselves based on the scant information that was provided and we had to update the location as to where the incident occurred based on the crime scene that we located.’

After searching the area where the injured man was found, police deemed the location safe ‘and a further exclusion zone was established at a property along Shannonvale Road where the shooting is believed to have occurred’.

The shooting took place on a sprawling cattle property which is ‘rural, remote, very hilly and heavily forested’.

‘It has taken a number of hours for police to search and clear the area, however we have declared a crime scene in the remote rural location where we believe we have located three deceased persons,’ Inspector Armitt said.

An emergency declaration for the area was issued at around 11.30am.

‘Investigations remain ongoing into the circumstances leading up to the shooting,’ the police said.

‘Police are currently conducting emergency operations in the area and requesting members of the public and aircraft to not attend the declared location.’

Police are clearing the ‘extensive’ property and will remain in place ‘as long as we need to do our job’, Acting Superintendent Armitt said.

Though there are no other people living in the exclusion zone, the police have urged everyone to avoid the area. 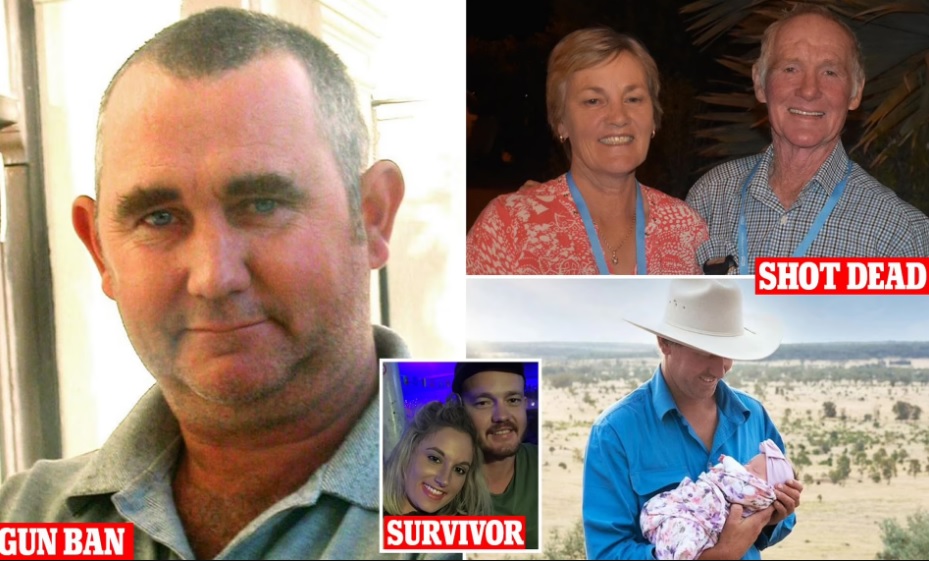