A Labor Councillor, a Liberal Councillor & a Chinese Property Developer Meet in a Park …

A Labor Councillor, a Liberal Councillor & a Chinese Property Developer Meet in a Park … 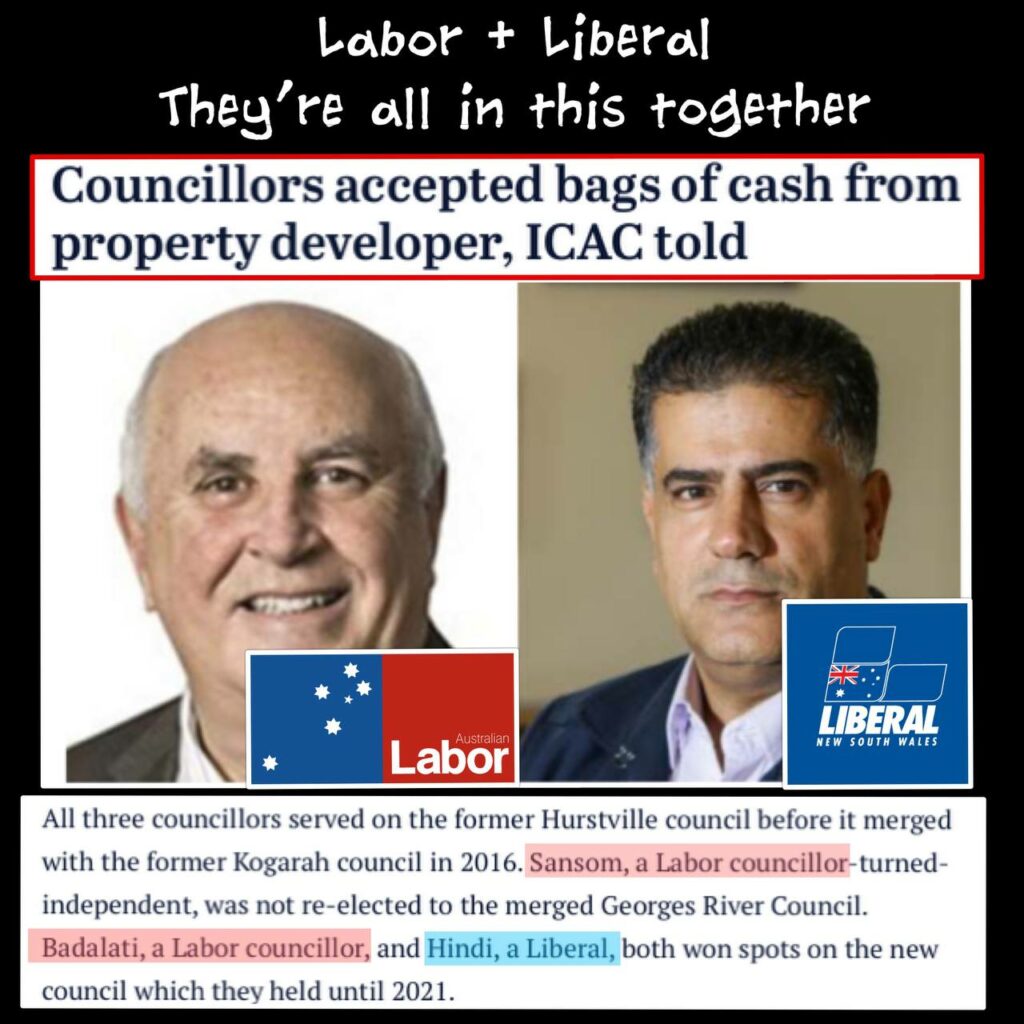 If you ever questioned how they’re “all in this together” …..

A Sydney councillor accepted bags filled with a combined $170,000 in cash from a property developer in return for his “help” regarding two multimillion-dollar developments in Hurstville, a corruption inquiry has heard.

Badalati (Labor) told the inquiry Uy met him and Hindi (Liberal) at a park in Rhodes on another occasion in 2016 and had given them $100,000 in cash each.

A Sydney councillor accepted bags filled with a combined $170,000 in cash from a property developer in return for his “help” regarding two multimillion-dollar developments in Hurstville, a corruption inquiry has heard.

The NSW Independent Commission Against Corruption is investigating whether former Georges River and Hurstville councillors, Vince Badalati and Con Hindi, and former Hurstville councillor Philip Sansom, accepted bribes or failed to disclose conflicts of interest linked to planning decisions in Hurstville from 2014 to 2021.

Former Hurstville and Georges River councillor Vince Badalati outside the Independent Commission Against Corruption on Tuesday.

The inquiry is probing whether the former councillors accepted benefits – including overseas flights and accommodation – from developers Ching Wah (Philip) Uy and Wensheng Liu, and businessman Yuqing Liu, in return for planning concessions.

It is also examining whether the three former councillors failed to declare, or properly manage, any conflict of interest arising from their relationships with Uy, Liu and Liu.

In her opening remarks to the inquiry on Tuesday, counsel assisting the commission, Zelie Heger, said the five-week probe would concentrate on planning applications for a block of 75 units on Treacy Street in Hurstville, and the Landmark Square development comprising 357 apartments, a 200-room hotel and a supermarket.

The inquiry heard Badalati, Hindi and Sansom had made numerous decisions linked to the two Hurstville developments during their time as councillors.

In his evidence, Badalati – a former Labor councillor – admitted he had received $70,000 in cash from Uy, a Hurstville real estate agent who was also the sole director of the builder for the Treacy Street apartment block.

Badalati said Uy met him on Paterson Avenue in Kingsgrove and handed him a shopping bag filled with $100 notes sometime in 2015 – the same year the development was approved by a regional planning panel.

“From his boot, he got a bag out and gave it to me. He said, this is for your help on Treacy Street. I was surprised. I said ‘Why?’ And he said ‘Just take it.’

Badalati said he had later called Hindi and said: “Philip gave me money in regards to Treacy Street.”

He said in his evidence that Hindi had “eventually” admitted he also received cash from Uy.

“My belief at the time was that it was Wensheng Liu’s money,” Badalati said.

Badalati told the inquiry Uy met him and Hindi at a park in Rhodes on another occasion in 2016 and had given them $100,000 in cash each.

“He opened his boot and gave us two bags each. [He said] ‘Thank you for your assistance on Landmark.’

“At the time I didn’t think either way whether it was for work, or assistance, already given, or the future. A month later, council was put into administration.”

All three councillors served on the former Hurstville council before it merged with the former Kogarah council in 2016. Sansom, a Labor councillor-turned-independent, was not re-elected to the merged Georges River Council. Badalati, a Labor councillor, and Hindi, a Liberal, both won spots on the new council which they held until 2021.

The hearing was told the ICAC would closely examine the circumstance of a trip Badalati, Hindi and Hindi’s wife – a real estate agent – took to China with Uy in April 2016, and who paid for the councillors’ expenses on the trip.

“The trip is important because it occurred only a week before Mr Hindi and Mr Badalati, along with Mr Sansom, voted on both the Treacy Street and Landmark Square developments at a council meeting on April 20,” Heger told the inquiry in her opening submissions.

In her opening remarks, Heger said that, since at least 2007, Badalati and Sansom had met up with Uy in China or Hong Kong fairly regularly, and they spent weekends together “eating, drinking, doing karaoke”.

“Mr Sansom has described these as ‘boys weekends’,” Heger said.

“That fact alone raises a potential conflict, given that from 2014, Mr Sansom and Mr Badalati were considering the Treacy Street developments in their capacities as councillors, but did not declare any conflict of interests in relation to those developments.”

The inquiry continues in front of Commissioner Stephen Rushton.