More importantly, the MSM would have to investigate themselves. But now they’re stuck between black rock and a very hard place @elonmusk

2. All, but a few, of the former intelligence agents were hired, by Facebook after the 2016 Presidential Election & after the FBI established their social media-focused task force FTIF.

4. The following is a list (obtained through PUBLICLY available LinkedIn profiles) of former CIA/FBI/NSA/DHS that are currently working at Facebook, at least 10 work in the Trust & Safety (Misinfo) department. Many of the LinkedIn profiles are private so those will not be posted. 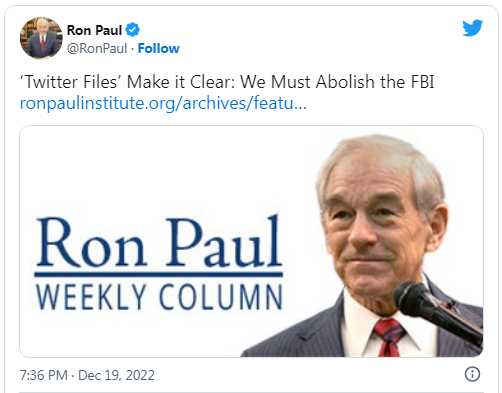 ‘Twitter Files’ Make it Clear: We Must Abolish the FBI

As we learn more and more from the “Twitter Files,” it is becoming all too obvious that Federal agencies such as the FBI viewed the First Amendment of our Constitution as an annoyance and an impediment. In Friday’s release from the pre-Musk era, journalist Matt Taibbi makes an astute observation: Twitter was essentially an FBI subsidiary.

The FBI, we now know, was obsessed with Twitter. We learned that agents sent Twitter Trust and Safety chief Yoel Roth some 150 emails between 2020 and 2022. Those emails regularly featured demands from US government officials for the “private” social media company to censor comments and ban commenters they did not like.

The Foreign Influence Task Force (FITF), a US government entity that included the FBI as well as other US intelligence agencies expressly forbidden from domestic activities, numbered 80 agents engaged regularly in telling Twitter which Tweets to censor and which accounts to ban. The Department of Homeland Security brought in outside government contractors and (government-funded) non-governmental organizations to separately pressure Twitter to suppress speech the US government did not like.

US Federal government agencies literally handed Twitter lists of Americans it wanted to see silenced, and Twitter complied. Let that sink in.

This should be a massive scandal and likely it would have been had it occurred under a Trump Administration. Indeed, Congress would be gearing up for Impeachment 3.0 if Trump-allied officials had engaged in such egregious behavior. But since these US government employees were by-and-large acting to suppress pro-Trump sentiment, all we hear are crickets.

What is interesting about these Twitter revelations is how obsessed the FBI and its government partners were with satire and humor. Even minor Twitter accounts with small numbers of followers were constantly flagged by the Feds for censorship and deletion. But knowledge of history helps us understand this obsession: in Soviet times the population was always engaged in joking about the ineptitude, corruption, and idiocy of the political class. Underground publications known as samizdat were rich with satire, humor, and ridicule.

Tyrants hate humor and cannot withstand satire. That is clearly why the FBI (and CIA) was determined to see a heavy hand raised against any American poking fun at the deep state.

There is good news in all of this, however. As Constitutional Law Professor Jonathan Turley wrote over the weekend, a new Harvard CAPS/Harris Poll found that even though the mainstream media has ignored the “Twitter files,” Americans have not. Nearly two-thirds of respondents believe that Twitter was involved in politically-motivated censorship in advance of the 2020 election. Some 70 percent of those polled believe Congress must take action against this corporate/state censorship.

As Professor Turley points out, although the First Amendment only applies to the US government, “it does apply to agents or surrogates of the government. Twitter now admits that such a relationship existed between its former officials and the government.”

So now we have proof that the FBI (along with US intelligence agencies and the Department of Homeland Security) have been acting through “private” social media companies to manipulate what Americans are allowed to say when they communicate with each other.

Is there anything more un-American than that? Personally, I find it sickening.

We do not need the FBI and CIA and other federal agencies viewing us as the enemy and attacking our Constitution. End the Fed…and End the Federal Bureau of Investigation! 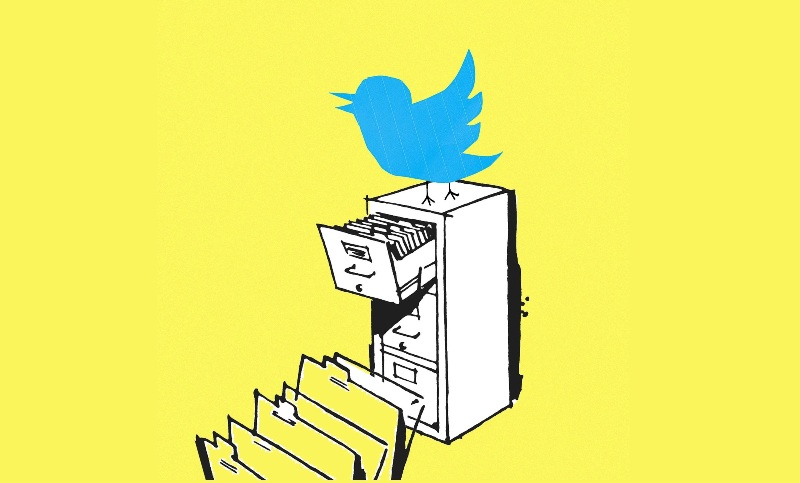