When I used to follow the footy,
Manly was my team.
Glad to see some of the boys are taking a stand.
There’s absolutely NO reason a football team needs to be wearing “pride” jerseys when they take the field.
Fair call? 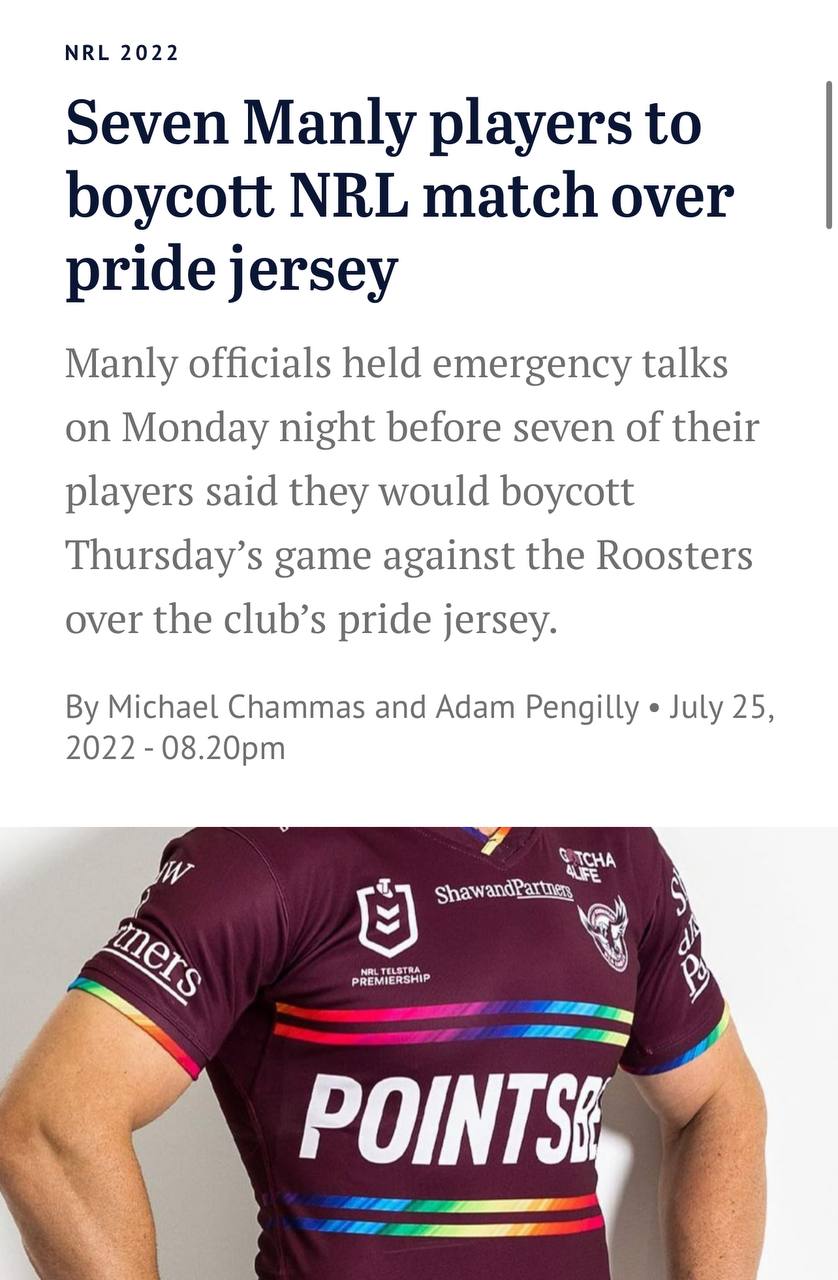 Seven Manly players will boycott this Thursday night’s clash against the Roosters after being blindsided by the club’s decision to wear a pride jersey as the Sea Eagles’ season descended into chaos.

Sources with knowledge of discussions told the Herald that Manly coach Des Hasler had told the players he understood the difficult position the players have been put in as a result of the club not consulting them about the jersey, and will support their decision not to play.

The club also understood the backlash it faced from the public if they decided against wearing the jersey after publicly launching it on Monday.

Manly officials were locked in emergency talks on Monday night with the seven players before the important clash with the Sydney Roosters.

On the day the club unveiled their rainbow-themed jersey to celebrate diversity and inclusivity, the Sea Eagles received complaints from the players.

The players did not want to wear the jersey on cultural and religious grounds.

The Herald has been told the Sea Eagles did not consult the playing group about plans to wear the jersey.

The club had originally planned to meet with the affected players when they returned to training on Tuesday but instead brought forward the meeting to Monday night as Hasler tried to smooth over a player revolt that threatens to leave his club’s season in tatters.

The Roosters are keeping the Sea Eagles out of the top eight on points differential, with the winner of Thursday’s game to take a giant step towards playing finals football.

Kieran Foran, Reuben Garrick and Sean Keppie modelled the jersey, which includes rainbow colours across the front of the jersey alongside the logo of sponsor PointsBet, and trimming on the sleeves and collar.

But the disgruntled players had little idea they would be asked to wear the jersey until it was officially released on Monday morning.

It prompted a flurry of phone calls to club officials, who were made aware of the players who did not want to wear the jersey.

Manly legend Ian Roberts, who publicly came out as gay during his playing days in the 1990s, had been an advocate of the club wearing the one-off jersey, and has urged the NRL to do more to encourage inclusivity in the game.

Roberts said he would comment further later in the week, but on Monday night said: “It hasn’t totally shocked me like it’s shocking everyone else. As an older gay man, I’m used to this. I expected there would be some sort of religious pushback.”

The NRL won’t allow the club to have players wearing alternate jerseys, meaning Manly would need to come to a resolution on whether all players would wear the pride jersey or not.

The code was preparing to launch its Women In League Round on Tuesday, with a breakfast to be held in Sydney.

Interim Manly chief executive Gary Wolman could not be reached for comment on Monday night. Chairman Scott Penn is currently in the United States. Greyhound Racing NSW boss Tony Mestrov is not due to begin as the Sea Eagles’ new chief executive until next week.

It’s not the first time an athlete has taken exception to wearing an inclusive jersey for a professional sporting team, with Giants AFLW player Haneen Zreika having stood down from a game on religious grounds last season. 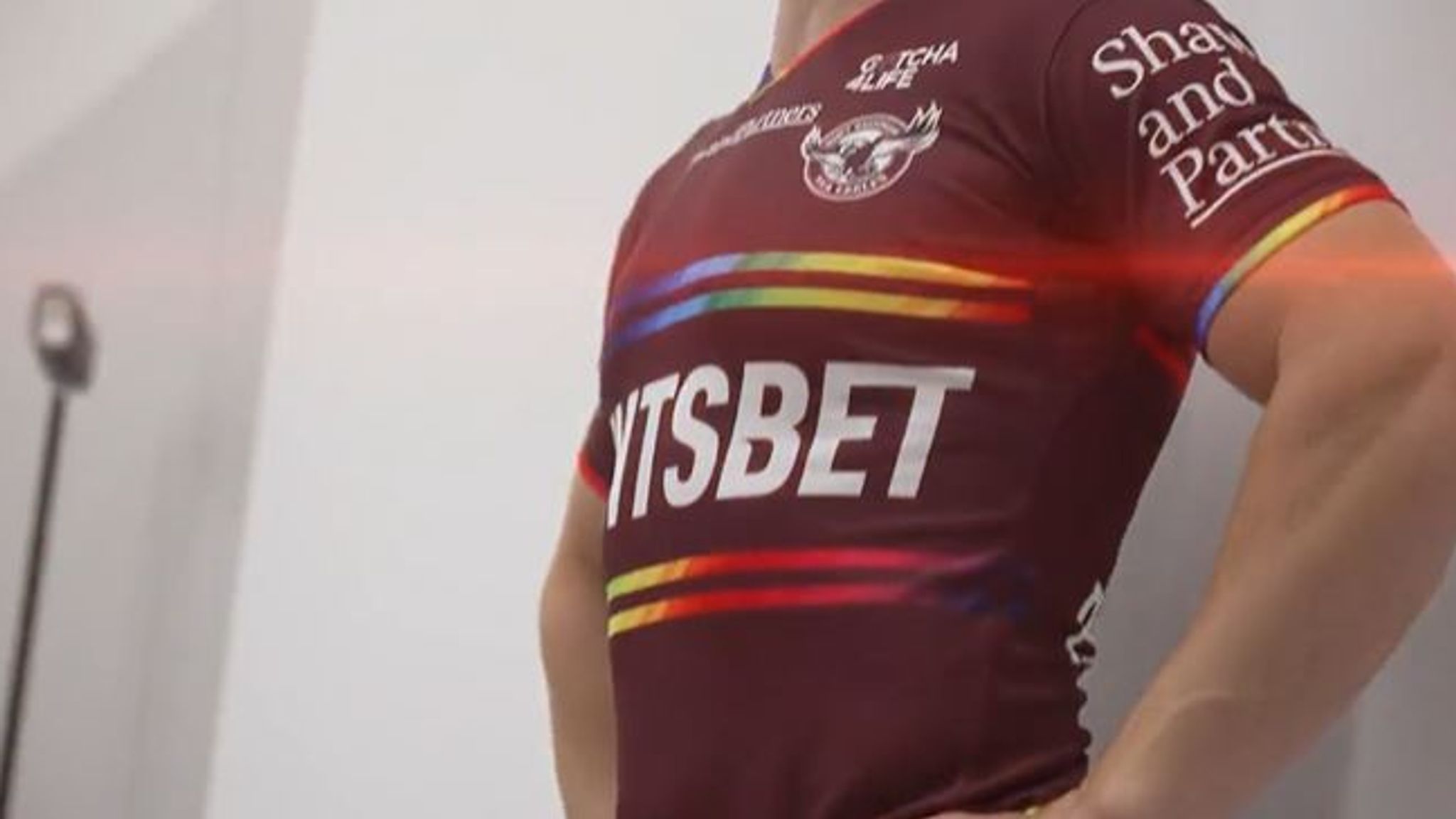 Share
Facebook
Twitter
Pinterest
WhatsApp
Previous articleFully Jabbed Toddler ‘Suddenly and Mysteriously’ Drops Dead at Childcare Centre
Next articleChristine Anderson MEP: “This Vaxxine Campaign It Will Go Down as the Biggest Scandal in Medical History, and Moreover It Will Be Known as the Biggest Crime Ever Committed on Humanity”