Breakfast television and evening current affairs programs are losing viewers, with claims about ‘digital migration’ as a cause not stacking up. 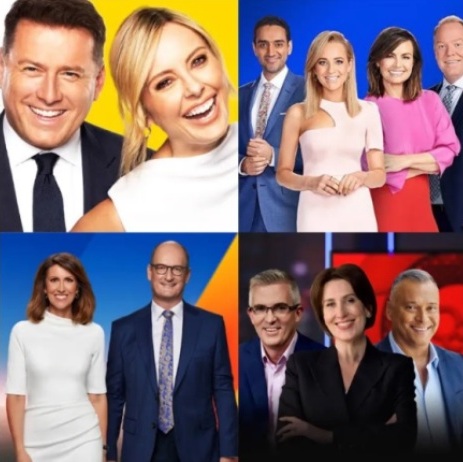 Breakfast TV ratings on Australia’s leading networks are plummeting in 2022.

Both Seven’s Sunrise and Nine’s Today, long considered ‘the jewels’ in the respective networks’ crowns, have shed up to 35 per cent of their audience over the course of a decade, according to reports.

In 2021, Sunrise’s viewership was down 28 percent from a decade earlier.

For Nine, the Today show has shed 35 per cent in the ratings over the same period.

It’s not just morning propaganda that is taking a hit, but also the night time talking heads.

According to reports, the ABC is in ‘panic mode’ after Q+A hit a new low in the TV ratings last week.

The public broadcaster is now asking members of its online market research group YourSpace for feedback on the show, as the hope to ‘turn things around’ for the foreseeable future.

The panel show was once a ratings winner for the ABC, attracting major political leaders of all persuasions and sparking debate over the content seen on the show.

Now, nobody could care less about the one-sided dribble.

Earlier this year, we also saw the same thing with night time TV’s ‘The Project’.

The Channel 10 current affairs program, hosted on Sunday by Hamish Macdonald, Lisa Wilkinson and Tommy Little, scored a dismal 185,000 in the 6.30pm time slot in the five-city metro market in March.

Could it be that people, after the last two years, are catching on to the deceptions?

Regardless, the propaganda machines will continue to spend billions of dollars each year to maintain the illusion of dominance.

THE ILLUSION OF DOMINANCE

All of these networks claim ‘migration to digital platforms’ is to blame for the declining free-to-air numbers, and while the broadcasting landscape has changed, here are the facts.

If people want to watch it, they will.

This is why non-political or news related content, such as building and cooking shows, are still massive revenue-generators for the companies. Advertisers still pay big $ for television slots.

Seven’s coverage of the nail-biting AFL elimination between Richmond and the Brisbane Lions at the Gabba scored an impressive 786,000 metro viewers.

Yes, I can watch the footy on my phone, but do I want that for the best viewing experience?

The same goes for all media.

People actually move to larger screens to get the best a program has offer, join in with families, etc.

Provide something that is perceived as good on TV, and people will tune in — on TV.

This old excuse of ‘migration’ to digital platforms is all a deflective shield.

The migration numbers don’t translate to interaction or revenue for online platforms, either.

Where are these people?

When you focus in on the news element, people are increasingly becoming not interesting.

That’s the reality of things.

But here’s the catch.

News services will continue to spend billions of dollars every year to ensure they remain on every TV screen as an illusionary tactic to show they are still the ‘top dogs’, the big deal in town.

Even if they lose this money each year.

Nine is part-owned by Goldman Sachs, for example.

There is an endless check book available to keep the illusion going.

Small political podcasts on YouTube get more numbers than Q&A or The Project can pull.

TV talking heads have become screens echoing to nobody.

Yet, they will never give in. To do so would mean they have truly lost their power; the mystique that keeps people captivated. They can’t have that, even if people aren’t watching the news pieces.

Because even those that aren’t watching still see the news on TV in a food court, in a shop window, etc.

It still presents itself as a distant omnipresent force, maintaining the false reality we live in.

If that was to disappear, the house of cards would have a hard time not collapsing.

Thus, the mass machine conglomerate will continue to present the illusion of dominance.

For as long as it takes.