Just two pieces of data are needed: the risk-benefit calculation by age where VAERS was used for the death data, and show us the autopsy results where the proper tests were made to rule out causality.

We think the COVID “vaccines” shouldn’t be used by anyone.

But we are very open to being proven we got it wrong and that all the deaths of our friends that happened after vaccination were just really “bad luck.”

Are these two documents too much to ask for?

It’s beyond frustrating that nobody is willing to show us either document.

The mainstream medical community has low standards. They blindly trust the CDC and the drug companies. They are easily convinced.

I would have expected the medical community to demand both documents, but they don’t do science anymore. All they do is blindly trust the CDC and FDA and don’t demand to see the underlying data.

Today, the mainstream medical community always trusts whatever the CDC and drug companies say. They believe that neither organization would ever lie or make a mistake.

I would like to point out that the entire mainstream medical community is not corrupt.

For example, Professors Prasad and Makary are the only two mainstream doctors I am aware of to publicly acknowledge that our trust in public health officials was misplaced.

Professor Prasad is also the author of an excellent op-ed, Scientists who express different views on Covid-19 should be heard, not demonized. It’s as relevant today as it was 2 years ago when he published it. Any scientist refusing to debate our team on our claims (which is pretty much everyone) should read Vinay’s op-ed and be ashamed of themselves.

Finally, Professor Prasad writes excellent articles on his Substack such as this one about how we shouldn’t get mad at the judge about masking; we should be mad at the CDC for not having any proof to back up their mandates. Here’s the end of that article:

The CDC failed you. It never ran a trial. It never generated knowledge. It kept us in the dark. It should be no surprise that it lost its power and legitimacy. It proved it does not deserve the power it was entrusted by the people. It failed to use science to reduce uncertainty. We should be ashamed of the organization. I certainly am.

And he even has a great sense of humor as well. Check out this tweet: 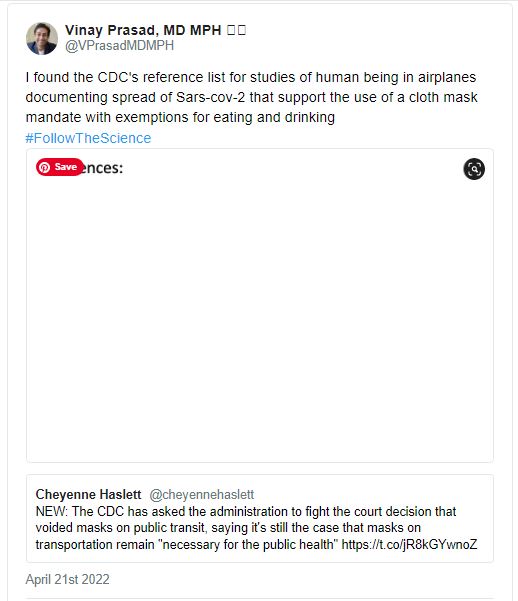