It seemed like it was only yesterday that everyone, everywhere told people to get boosted, not only once, but twice and beyond! 5 shots, boost away baby!

But it seems like Norway isn’t quite as keen on boosters all of a sudden.

Despite opening up for offering a 4th booster to everyone aged 18-64, neither the government nor the Norwegian Health Institute wants to come with a general recommendation on taking the boosters. Huh. I wonder why?

A bunch of health experts and doctors in Norway are now saying that they don’t think younger adults should take the boosters, one doctor even said he won’t take them himself!

“No, I won’t do it. I have recently had covid-19, but I wouldn’t have taken this booster anyway” said Einar Sagberg, Senior infectious disease Doctor in Drammen.

Other senior doctors in Norway are warning that especially young people should really think twice before taking the booster.

“Especially the youngest should consider potential side effects against the benefits of taking this dose” says Ingrid Bjerring, chief Doctor at Lier municipality. She herself is not planning on taking the booster either!

Turns out that Miert Lindboe, chief Doctor at Oslo municipality won’t take the booster either.

“As a healthy 42 year old, I won’t take it, but I understand if individuals feel a need for the booster” he said.

So the Norwegian Health Institute is NOT giving a recommendation for everyone to take the boosters, despite it beeing freely available. 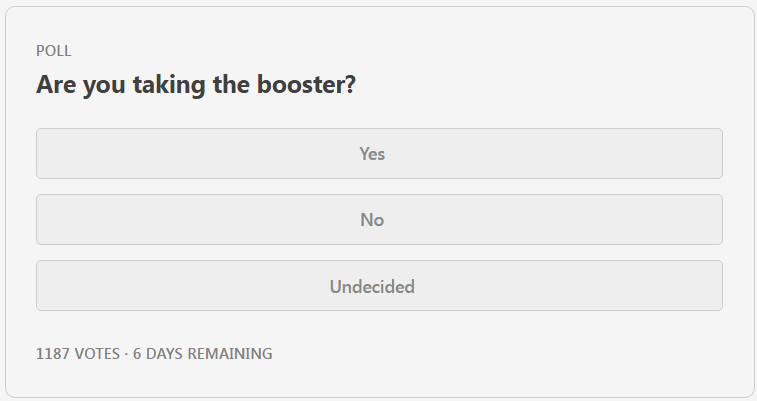 Here comes something that really surprised me, I didn’t think I would see the top health experts in Norway say something like this. Keep in mind that the below quote is from the department director at the Norwegian Institute of Public Health.

“We did not find sufficient evidence to recommend that this part of the population should take a new dose now…Each vaccine comes with the risk for side effects. Is it then responsible to offer this, when we know that the individual health benefit of a booster likely is low?

This is one of the reasons that we have said not everyone should take a new dose, but that it is up to the individual. As said, everyone has to be aware of the risk for side effects. Some can experience more troublesome and sever side effects, but most of the side effects are temporary and go away on it’s own after a few days” – said Are Stuwitz Berg at the Norwegian Institute for Public Health.

I myself recently had an appointment with one of the absolute top cardiologists in Norway for a heart checkup after having had some heart palpitations. He told me that both covid and the “you know what” could cause heart problems. This is not me saying it. I’m just telling you what this top heart doctor in Norway told me. Thankfully for my part, everything was all good!

Basically what they are saying is that younger people really should think twice before getting the booster. Why isn’t this all over the news???

A vaccine researcher at the University of Oslo says that there is no reason that healthy people should be vaccinated for a fourth time.

This is huge news. In fact, it should be all over the news that Norway and Norwegian doctors are saying this. Question is, why isn’t it bigger news?

But it’s not only Norway.

In Denmark they have decided to not give boosters at all to people under 50 except if they have health problems or conditions where covid poses a health risk, among those conditions is obesity.

So we are now seeing top doctors becoming conspiracy theorists, not wanting to take the absolutely safe and effective vaccine booster themselves!

For some reason it seems like Norwegian doctors are willing to talk about things that nobody else really wants to talk about. For example, not long ago, it was in fact Norwegian doctors who sounded the alarm on a mysterious rise in patients and excess deaths. You can read my whole investigation into that here: 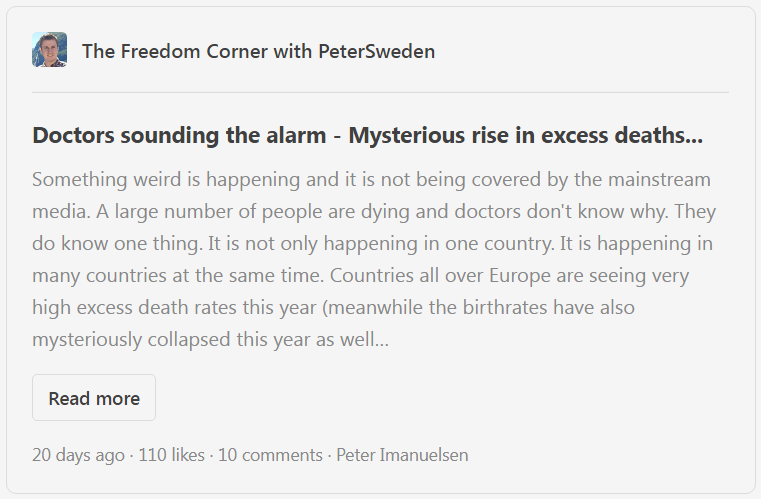 I have my doubts that this will become big news outside of Norway, so please do everything you can to share this everywhere!

Share
Facebook
Twitter
Pinterest
WhatsApp
Previous articleAustralian National Review Founder Says, “Sadly the Next 12-24 Months Willl See a Sharp Uptick in Deaths From the Lethal Jabs, as We Predicted Some Time Ago”
Next articleThe Western Elite Love to Push Their Values, Not Just on Westerners, But on the World. Agree or disagree?