ANOTHER BOOGIEMAN INCOMING!!!!!!
Watch them try to attack the beef industry with this one.
We know the plan; cull the cows and feed us bugs

“In the worst-case scenario, billions would have to be spent on a national response and scores of painfully diseased cattle, sheep, pigs and goats could be culled.” 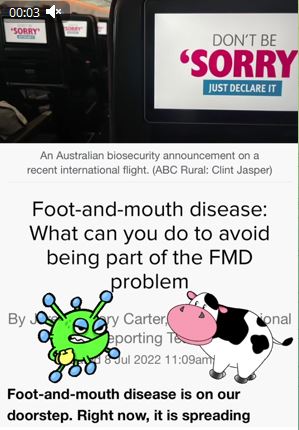 Foot-and-Mouth Disease: What can you do to avoid being part of the FMD Problem

Foot-and-mouth disease is on our doorstep. Right now, it is spreading across livestock in Bali and throughout Indonesia. If it gets to Australia, the consequences would be devastating.

In the worst-case scenario, billions would have to be spent on a national response and scores of painfully diseased cattle, sheep, pigs and goats could be culled.

An outbreak could wipe over $80 billion from the national economy. Livelihoods up and down the country would be at risk.

If it seems like a problem purely to be managed by Australian farmers — it is not. There is every likelihood FMD could be unsuspectingly brought in and spread throughout Australia by members of the public. 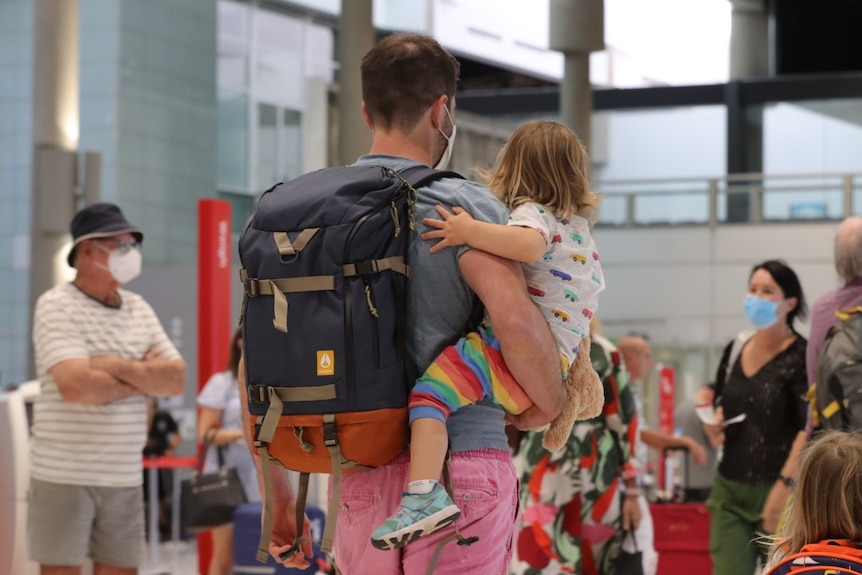 Travellers from Indonesia are the focus of the government’s FMD response.

Over the past two years of the pandemic, many Australians have prided themselves on the actions they have taken to ‘stop the spread’ of COVID-19.

Now, restriction-weary members of the public once again have a role to play in avoiding being part of the spread of a highly-infectious disease.

The Australian government, the livestock industry and members of the biosecurity and scientific community are imploring Australians to take the risk seriously and avoid being part of the FMD problem.

Warning: This story contains images some readers may find distressing Foot-and-mouth disease is not in Australia. That is the tentative good news.

It has been 150 years since it was last present here, but it has never been closer.

With increased international travel and the short-term winter holiday plans of many Australians in full swing, one of the biggest dangers is returning travellers bringing FMD into the country from Bali.

FMD spreads between animals via their breath, through contact with the blisters, and through infected milk, semen, faeces and urine. Cattle suspected of having foot-and-mouth disease in Indonesia.

It can also live on vehicle tyres, and can be carried on clothing and especially, footwear.

Travellers do not need to have visited rural or farming areas to be at risk of coming in contact with FMD.

Research has found that under certain conditions, the virus can remain infective for 11 weeks on boot leather and 13 weeks on rubber boots.

Such is the seriousness of the threat that there are growing calls to ban travel between Bali and Australia — a move Agriculture Minister Murray Watt has ruled out.

Instead, the Australian government this week announced a range of new measures, including the presence of a biosecurity officer on every flight coming into Australia from Indonesia.

A message will be broadcast on planes specific to the threat of FMD, while biosecurity surveillance will be beefed up at airports, including more detector dogs.

More measures are expected to be announced in the coming days.

Nationals Leader David Littleproud is among those calling for returning travellers from Indonesia to have to use foot baths with disinfectant at airports.

Minister Watt said foot baths would not be introduced at this stage — in part because passengers might take multiple pairs of shoes with them on holiday, and partly because of the footwear choices of travellers to Bali. 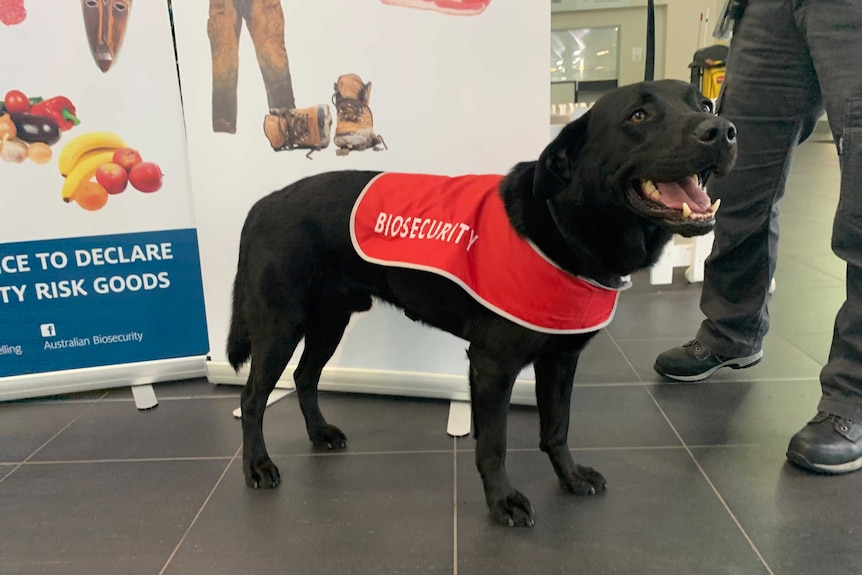 Tourists will be greeted by airport biosecurity dogs after the detection of FMD in Bali.

“The reality is that with a place like Indonesia, there are a lot of people who come back in wearing thongs or open-toed footwear,” Mr Watt told ABC Radio.

“The chemicals that are in foot baths are pretty damaging to people if they come into contact with their skin.” Travellers from Australia are beginning to return to Bali in greater numbers.

The minister said other options like disinfectant mats were being considered.

Beyond any measures at the border, travellers are being asked to take extra precautions before returning to Australia from Indonesia.

Washing and scrubbing shoes and clothes with disinfectant before boarding a flight is one effective method at reducing the likelihood of spreading the disease.

Can I contract FMD?

Unlike hand, foot and mouth disease which can be hugely unpleasant for children, the risk of foot-and-mouth disease to humans is extremely rare and does not result in serious disease.

It is possible for humans to carry the virus in their nose for up to 24 hours, according to the Department of Agriculture, which can lead to onward infection in animals. FMD is not transmitted to humans through meat.

The department however assures travellers that FMD is not transmitted to humans through meat.

If a person was to eat a burger in Bali made from a cow infected with FMD, they would not contract the disease.

What about travelling from other countries?

It is believed FMD spread into Indonesia via goats smuggled in from Malaysia.

The Australian government’s focus remains on the specific threat of the disease arriving in Australia from Indonesia and is working with authorities there to limit the spread. 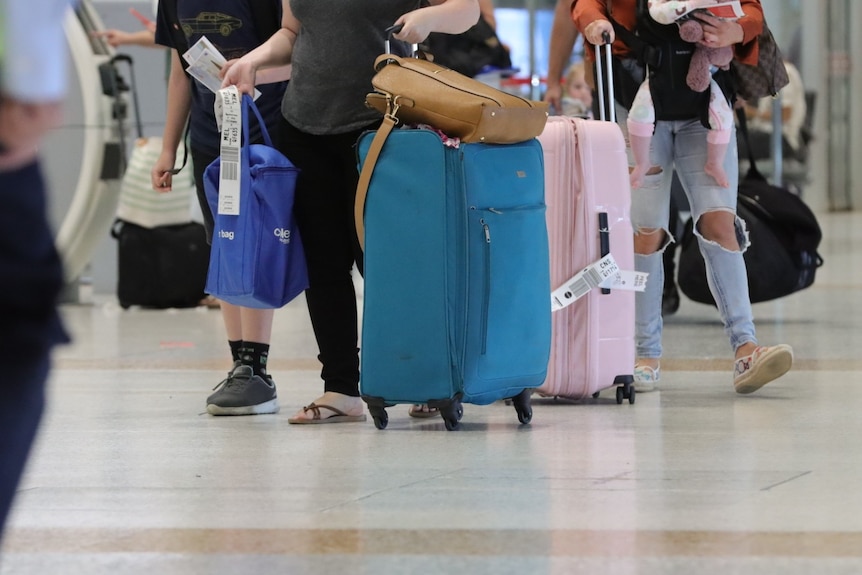 If FMD reaches Australia, it would cause changed trade and potentially travel conditions.

There are not presently FMD concerns for travellers arriving to Australia from other countries.

If the disease spreads internationally — or arrives here — Australians could quickly be faced with a changed set of trade and travel circumstances.

Honesty at the border

As surveillance and biosecurity measures continue to be ramped up, returning travellers — particularly those flying from Indonesia— are being asked to take incoming passenger cards seriously.

“Nobody wants to be the one that brings it in,” president of the National Farmers Federation president Fiona Simson told ABC Radio. The highly contagious foot-and-mouth disease is not yet present in Australia.

She implored travellers to be honest about where they had travelled to and what sort of contact or exposure they might have had with livestock.

“We need to make sure that people are aware that [FMD] is so easy to carry and that if they have been in contact with an animal of any kind, they need to be declaring it,” she said.

“You don’t need to have been on a farm to carry FMD. You can be exposed just by any sort of contact with a cow or cloven-footed animal of any kind, or having stepped in some animal manure in the street.