Nearly 30,000 Deaths Reported to Vaers, Including 17-Year-Old Who Died of Myocarditis 5 Months After Pfizer Shot

Nearly 30,000 Deaths Reported to Vaers, Including 17-Year-Old Who Died of Myocarditis 5 Months After Pfizer Shot

The Centers for Disease Control and Prevention (CDC) today released new data showing a total of 1,371,474 reports of adverse events following COVID-19 vaccines were submitted between Dec. 14, 2020, and July 29, 2022, to the Vaccine Adverse Event Reporting System (VAERS). That’s an increase of 13,534 adverse events over the previous week.

VAERS is the primary government-funded system for reporting adverse vaccine reactions in the U.S.

The data included a total of 29,981 reports of deaths — an increase of 191 over the previous week — and 249,116 serious injuries, including deaths, during the same time period — up 1,430 compared with the previous week.

Foreign reports are reports foreign subsidiaries send to U.S. vaccine manufacturers. Under U.S. Food and Drug Administration (FDA) regulations, if a manufacturer is notified of a foreign case report that describes an event that is both serious and does not appear on the product’s labeling, the manufacturer is required to submit the report to VAERS. 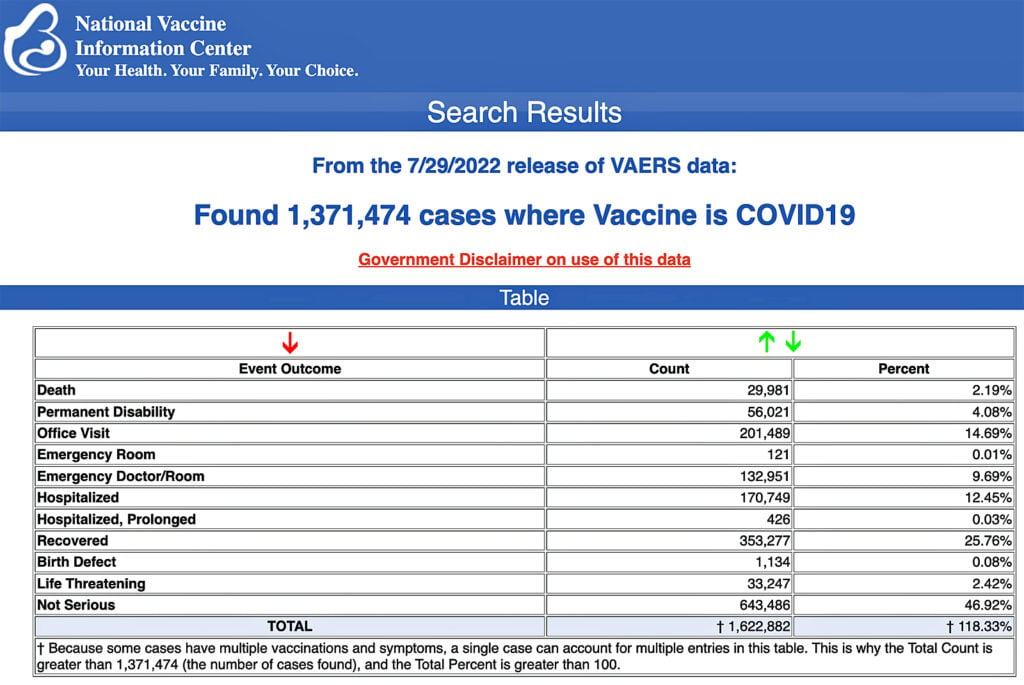 Every Friday, VAERS publishes vaccine injury reports received as of a specified date. Reports submitted to VAERS require further investigation before a causal relationship can be confirmed.

Historically, VAERS has been shown to report only 1% of actual vaccine adverse events.

The most recent report of a death in the 12- to 17-year-old age group was that of a 17-year-old male from Pennsylvania (VAERS I.D. ​2396146) who died from lymphocytic myocarditis approximately five months after receiving his first dose of Pfizer. The patient had no relevant medical history, according to the report.

The report states the “patient was just hanging with buddies at a soccer game, patient just collapsed, just died right there, EMT rushed patient to hospital and tried 42 minutes of CPR — nothing happened. Once autopsy was done, the patient definitely had myocarditis, and think it was lymphocytic myocarditis.”

The patient did not receive any other vaccine within four weeks of his first dose of Pfizer. The batch and lot number have been requested and “will be submitted if and when received.” However, this information will not be available to the public.

According to the CDC, “VAERS data available to the public include only the initial report data to VAERS. Updated data which contains data from medical records and corrections reported during follow up are used by the government for analysis. However, for numerous reasons including data consistency, these amended data are not available to the public.”

Children’s Health Defense (CHD) asks anyone who has experienced an adverse reaction, to any vaccine, to file a report following these three steps.

GBS is a rare neurological disorder in which the body’s immune system mistakenly attacks part of its peripheral nervous system, the network of nerves located outside of the brain and spinal cord.

According to South African health authorities, the person who died developed symptoms shortly after receiving J&J’s vaccine, which led to prolonged hospitalization, mechanical ventilation, further infections and death. No other cause for the GBS could be identified.

To protect patient confidentiality, no patient details, including the province where the death occurred, will be made public.

The UK family of a 27-year-old engineer who died from catastrophic brain bleeds after receiving AstraZeneca’s COVID-19 vaccine is considering legal action, pending an upcoming preliminary review of their son’s case.

Jack Last, who was vaccinated March 30, 2021, died three weeks after receiving the AstraZeneca jab. A CT scan on April 10, 2021, revealed Last had developed a cerebral venous sinus thrombosis, which occurs when a blood clot forms in the brain’s venous sinuses and prevents blood from draining out of the brain.

Last died at Addenbrooke’s Hospital in Cambridge, UK, on April 20, 2021 — 11 days after he sought medical treatment for severe headaches.

A pre-inquest review will be held on August 11, after which a full inquest will be scheduled. An inquest is a formal investigation conducted by a coroner in order to determine how someone died. The purpose of an inquest is limited to establishing the identity of the deceased individual as well as where, when and how they died.

Woman feels ‘like the walking dead’ after COVID vaccine injuries

In an exclusive interview with The Defender, Catherine Parker, 48, said she had a complete and fulfilling life prior to receiving her first dose of a COVID-19 vaccine on April 1, 2021.

Within two weeks of receiving the J&J shot, Parker said she began to have chronic fatigue and insomnia, but doctors said her symptoms were related to menopause. After receiving a Pfizer booster on Nov. 9, 2021, her symptoms worsened. Her hair began to fall out, she had brain fog and she developed uncontrollable tremors, spasms and migraines to the point she couldn’t walk or communicate.

Parker developed a “laundry list of ailments” and tested positive for the Epstein-Barr virus, despite “never [having] had mono in my entire life,” and for antinuclear antibodies and kidney abnormalities.

Parker’s symptoms — and the dismissive attitude of much of the medical establishment — led her to start the Vaccine Injury/Side Effects Support Group on Facebook earlier this year.

In addition, Parker has presented her personal story on social media platforms, including Facebook, YouTube and TikTok, and launched an online crowdfunding campaign to help support her rising medical costs.

The Defender interviewed three other people injured by COVID-19 vaccines who are members of Parker’s group.

The European Medicines Agency (EMA) Wednesday recommended adding a warning for two types of heart inflammation to Novavax’s COVID-19 vaccine, marketed under the brand names Nuvaxovid and Covovax, based on a small number of cases reported in those who received the vaccine.

According to a statement, the EMA’s Pharmacovigilance Risk Assessment Committee — responsible for assessing and monitoring the safety of human medicines — concluded that “myocarditis and pericarditis can occur following vaccination with Nuvaxovid.”

“The Committee is therefore recommending listing myocarditis and pericarditis as new side effects in the product information for Nuvaxovid, together with a warning to raise awareness among healthcare professionals and people receiving this vaccine,” the statement said.

The committee also requested the “marketing authorization holder of Nuvaxovid provides additional data on risk of side effects occurring.”

According to Reuters, the FDA flagged Novavax’s risk of heart inflammation in early June. Yet, the agency on July 13 granted Novavax’s request for Emergency Use Authorization of the vaccine for adults 18 and over in the U.S. 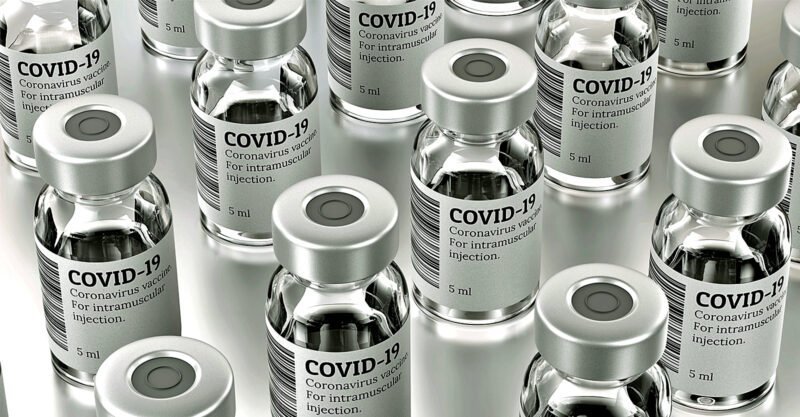