Canadian Women Gets Long C0vid From Taking the Vaxxine and Wants to Be Able to Commit Suicide, Not Realising She Already Did When She Took the Jab- It Just Takes a While

Canadian Women Gets Long C0vid From Taking the Vaxxine and Wants to Be Able to Commit Suicide, Not Realising She Already Did When She Took the Jab- It Just Takes a While 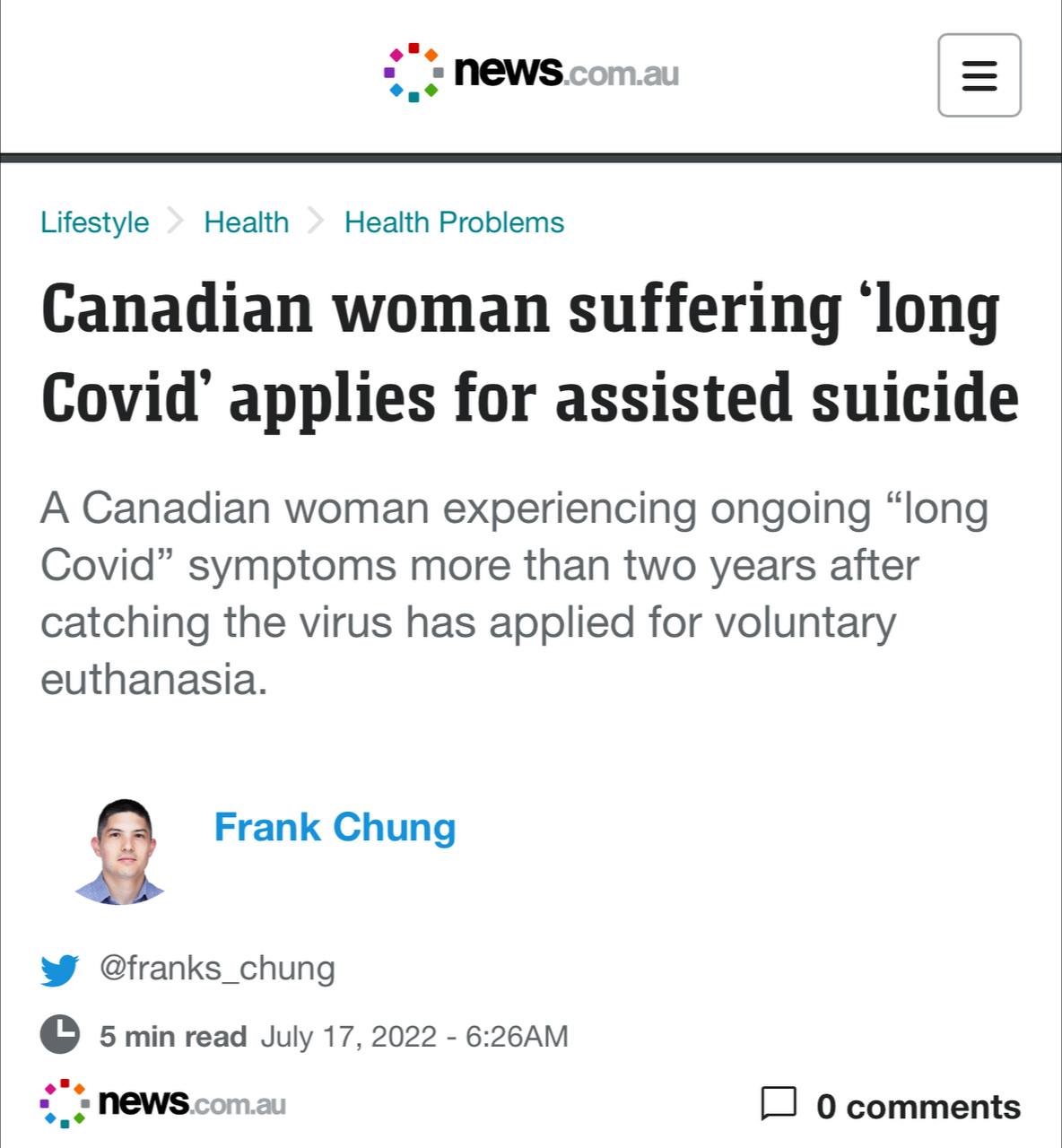 How convenient…
Fill them full of long term Vax injuries, call it “long covid” then help them finish themselves off because science.

Tracey Thompson, a Toronto resident in her 50s, told CTV News she had begun the process of applying for Medical Assistance in Dying (MAiD), a procedure that first became legal in Canada in 2016, due to her enduring illness and lack of financial support.

The former chef has lost 26 months of income, has no foreseeable ability to return to work, and expects to run out of money in about five months.

“(MAiD) is exclusively a financial consideration,” she said. “My choices are basically to die slowly and painfully, or quickly. Those are the options that are left.”

Ms Thompson said in addition to severe fatigue, her symptoms included being unable to read books or text longer than a tweet, blurring vision around sunset, difficulty digesting food, altered sense of taste and smell, difficulty breathing, and scars on her heart from swelling due to myocarditis.

“Long Covid” is ill-defined and difficult to diagnose. Some experts claim roughly 5 per cent of people who contract the virus go on to develop long-term symptoms, including shortness of breath, fatigue, fever, headaches and “brain fog”.

In Australia, that would suggest roughly 400,000 people may be affected. Ms Thompson told the Canadian broadcaster she previously worked long hours in a physically demanding job, but now finds standing up to get a glass of water a challenge.

“From being able-bodied and employed to basically bedbound,” she said.

“I can’t get up on average for 20-plus hours. I have very little capacity to expend the energy physically, mentally and emotionally, so I try to stay home all the time.”

“I still enjoy life. Birds chirping, small things that make up a day are still pleasant to me, they’re still enjoyable. I still enjoy my friends. There’s a lot to enjoy in life, even if it’s small.”

But she said she didn’t think she could survive without an income.

“I don’t relish the idea of suffering for months to come to the same conclusion,” she said.

“When support is not coming, things aren’t going to change. It seems irrational to put myself through that just to die in the end.”

Since “long Covid” is not clearly outlined in the Ontario Disability Support Program, Ms Thompson said it was unclear whether she would qualify, and the process could take years.

Even if she was eligible, Ms Thompson said the maximum monthly amount of $C1169 ($A1333) would at best cover her rent.

“That would be the entirety of my living budget,” she said.

Ms Thompson told the broadcaster she had so far sought one doctor’s approval for MAiD and was waiting on a second specialist.

Under the scheme, an applicant needs two independent doctors or nurse practitioners to confirm they meet the criteria of having a “grievous and irremediable medical condition”, being “in an advanced state of decline that cannot be reversed”, and experiencing “unbearable physical or mental suffering from your illness, disease, disability or state of decline that cannot be relieved under conditions that you consider acceptable”. A nurse prepares a dose of the Pfizer vaccine in Quebec

Canadians do not have to have a terminal illness to be eligible for MAiD.

Assisted suicide became legal in Canada in 2016, but only for those with a terminal illness whose natural death was “reasonably foreseeable”.

That requirement was removed last year with a sweeping euthanasia law called Bill C-7, replaced with the language “cannot be relieved under conditions that you consider acceptable”.

Ms Thompson said she was confident she would get approval.

“As best I know, I would meet the criteria,” she said. “I’m very ill. There is no treatment. There is no cure. You don’t have to be terminally ill.”

Canada’s permissive euthanasia laws have been the subject of intense debate and questions over whether people are choosing to die due to lack of financial support.

“One of the things that becomes very difficult to tease out is when suffering is related to the fact people don’t have housing or food and how that is so difficult to separate from suffering related to a medical condition,” Toronto palliative care doctor Naheed Dosani told CTV News.

“My worry is that we are creating a situation where it is easier for people to choose death by MAiD than to choose to live well, because society is not offering them adequate access to money, housing, food security and social support.”

In a column for The Spectator earlier this year, Oxford lecturer Yuan Yi Zhu bluntly asked, “Why is Canada euthanising the poor?”

He noted that “despite the Canadian government’s insistence that assisted suicide is all about individual autonomy, it has also kept an eye on its fiscal advantages”.

“Even before Bill C-7 entered into force, the country’s Parliamentary Budget Officer published a report about the cost savings it would create: whereas the old MAID regime saved $C86.9 million per year – a ‘net cost reduction’, in the sterile words of the report – Bill C-7 would create additional net savings of $C62 million per year,” he wrote.

“Healthcare, particular for those suffering from chronic conditions, is expensive; but assisted suicide only costs the taxpayer $C2327 per ‘case’. And, of course, those who have to rely wholly on government-provided Medicare pose a far greater burden on the exchequer than those who have savings or private insurance.”